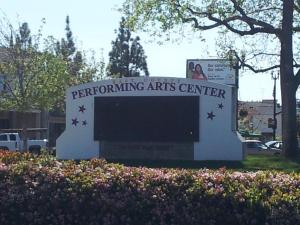 April 11, 2013 (El Cajon)--Members of the Grossmont Union High School District (GUHSD) Board on Wednesday night decided in principle (with no formal vote) to begin exploratory talks with the City of El Cajon on becoming a partner in the operation of the troubled East County Performing Arts Center (ECPAC) , as well as build a multi-purpose conference center adjacent to the theater.

The Board also voted 4-1 (with Priscilla Schreiber voting “no”)  to endorse building a 325-seat performing arts center on the campus of Grossmont High School at the cost of $15.1 million dollars.

Representing GUHSD on the ad hoc committee will be board president Jim Kelly and board member Jim Stieringer.

Referring to ECPAC as a “bouncing ball,” a major proponent of the proposal is board president Jim Kelly, who said that such a partnership would be a proactive opportunity for the district to overcome the limitations of the relatively small 325-seat capacity of the performing arts centers being built on the eleven high school campuses in the district.

The first of the GUHSD on-campus performing arts centers is projected to open in May at Helix Charter High School with its 34,000 square foot center which will include a 410-seat theater, dance studio, digital music labs, band and choral room, scene shop, costume shop, and recital rooms. The complex will also have a “black box” theater which will seat 210 people for arts productions in the round.

Another component of the GUHSD/ECPAC proposal is that the City of El Cajon would donate land to GUHSD next to ECPAC for the construction of a multi-purpose conference center with a flexible performance area and other amenities such as an additional scene and costume shop adjacent to the 1,142 seat theater which has been shuttered for three years. The adjoining facility could also address ECPAC’s lack of adequate restrooms and other amenities.

El Cajon City Council member Gary Kendrick, a major proponent of the concept of an expanded arts block in downtown El Cajon, spoke before the GUHSD cited the additional benefits of such an arrangement saying that the expanded performing arts center could become what he envisions to be a premier performing arts education center in California.

“With the addition of a multi-use center, we could train students to operate a large performing arts center professionally. They could learn the technical aspects of running a theater such as running lights and the sound system for productions being presented at the theater. Culinary arts students could be utilized to service banquets .  There is nothing like that anywhere which exists that I know of,” Kendrick said.  "No matter what, the theater will be opening."

He also recognized and praised the efforts of board member Schreiber for coming up with the idea and her enthusiasm towards an ECPAC partnership and building a multi-purpose next to the theater.

Kendrick voiced concern to ECM, however, that as the District moves toward building multi-purpose centers or performing arts centers on all campuses, this could make it "more challenging for the city to run ECPAC" due to the competition. "We've already got a perfectly good theater, so it isn't necessary to have smaller duplicates all over the region."

Local arts activist, professional musician Ivars Bezdechi, an early founding member of the “Save ECPAC” Citizens Committee which played a major role in convincing the El Cajon City Council to reverse its March 2012 decision to demolish ECPAC, also spoke in favor of the partnership proposal and building a multi-purpose conference center to the theater.

The proposed partnership is a “win-win” opportunity for all concerned, he testified. It would provide not only a chance for GUHSD board to show their true commitment to the students in the district in arts education, but also an opportunity  for the district to be an active participation in the revitalization of downtown El Cajon. “We all acknowledge that ECPAC is the jewel of downtown El Cajon and East County San Diego.  This is an opportunity which would allow us to take an existing facility and improve on it benefiting students and the community at large."

The board acknowledged that it would have to see how it could be in compliance with the requirements and restrictions of local voter-approved school financing bond measures in order pursue the proposed relationship with the City of El Cajon.

GUHSD board membe, Richard Hoy, in addition to talks with the City of El Cajon, directed the ad hoc committee to consult with district music and theater instructors to see how they would utilize the availability of ECPAC for their concerts and productions.  He also contended that GUHSD would not directly financially support the refurbishing and restoration of ECPAC.

The committee is expected report back on its exploratory talks and findings at the GUHSD’s May board meeting.