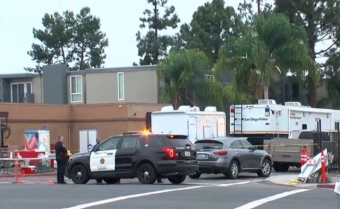 June 24, 2018 (San Diego) – Two San Diego Police officers who responded to a call in the Rolando area near San Diego State University last night were shot by a suspect wearing body armor.  Both officers are listed in stable condition, one with serious injuries, though Police Chief David Nisleit says both are expected to survive.

A caller at 10:15 last night reported hearing cursing and a violent altercation at 4860 Rolando Court.  When officers knocked on the door, there was no response. Smelling smoke, the officers asked for the fire department, then opened the door. They were met with gunfire and two of the three officers present fired back.

The SWAT team was called in and residents were evacuated from the Tuscany Place apartment complex.

A robotic device and a police dog were later used to check the premises, where the suspect was found dead inside. It is not yet known whether he died of shots fired by police or of a self-inflicted gunshot. Neighbors told the San Diego Union-Tribune that they heard around 15 shots fired, also indicating the resident had a history of mental instability.

According to Chief Nisleit, speaking at a press conference this morning, the suspect had a criminal history and police have responded numerous times in recent years to the location, Times of San Diego reports.

Nisleit said a radio call reporting officers wounded was the “worst call you can ever get.”

The identity of the suspect has not yet been released.

Saw this last night on TV. I hope the officers heal quick and all is well with them and their families.