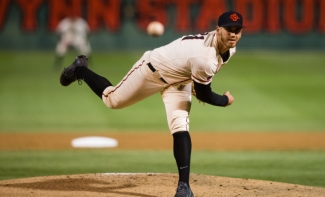 April 3, 2018 (Lake Elsinore) - San Diego State starting pitcher Harrison Pyatt took a no-hitter bid into the eighth inning before surrendering his first and only hit of the game in SDSU baseball's  5-1 victory over Long Beach State at Lake Elsinore Diamond on Tuesday night. SDSU earns its 20th win of the season and improves to 20-9 overall, while LBSU drops to 11-18 on the season.

Pyatt started his outing off strong by retiring each of the first 11 batters he faced. The junior set a new career-high with eight innings pitched and had a potential no-hitter broken up on a two-out double by LBSU's Jarren Duran in the eighth inning. Pyatt finished his outing off with five strikeouts and two walks and needed just 90 pitches to navigate his way to his second win of the season.

SDSU got the bats going early with a three-run first inning. Jordan Verdon hit his 16th double of the season to give the Aztecs a pair of runners in scoring position and in the next at-bat, Dean Nevarez converted on the run-scoring opportunity with a single plating both Verdon and David Hensley. The Aztecs capped the scoring on an RBI single by Casey Schmitt that brought home Nevarez.

That was all the offense the Aztecs needed, however, SDSU posted a pair of insurance runs in the sixth. Each of SDSU's first three batters in the frame reached base, creating a bases-loaded, no-out situation. Pinch-hitter Matt Rudick drew a bases-loaded walk to score Verdon and Schmitt scored Nevarez on a sacrifice fly to extend SDSU's lead to 5-0.

LBSU's lone run came on their first hit of the day. Pyatt surrendered a pair of walks in the top of the eighth before Duran hit an RBI double just before LBSU's Antonio Torres was thrown out at the plate trying to score an additional run on the play to end the inning.

Ray Lambert was called upon to pitch the ninth and faced the minimum. After opening the ninth with a strikeout, Lambert surrendered LBSU's second and final hit of the game. Lambert quickly recorded the game's final two outs by inducing a 4-6-3 double play against pinch-hitter Tristan Mercadel to end the ballgame.

SDSU plays a three-game Mountain West road series this weekend at Air Force. The series is set to begin on Friday, April 6 at 2:00 p.m.