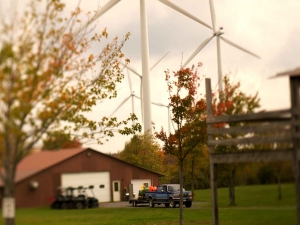 go) – Tomorrow at 9 a.m.,  San Diego County's Planning Commission will decide whether to approve a wind ordinance that would enable construction of numerous wind energy projects in our region's mountains, rural and desert communities.

Why, then, did San Diego County’s Health and Human Services Agency just issue a public health position statement that amounts to a whitewash of serious health problems linked to wind turbines around the world?

This week, a coalition representing 600 associations of wind industry victims in 26 countries called for a moratorium on wind turbine projects, citing adverse health impacts among people living near turbines.

Here in San Diego County, the Manzanita band of the Kumeyaay nation is claiming severe health impacts from nearby wind turbines; tribal members have been accepted into a health study at a local university. Stray voltages levels 1,000 times normal have been measured at their tribal hall and church--and an epidemiologist who has been published over 100 peer-reviewed journals blames the voltage and health problems on wind turbines nearby.

ECM previously documented  serious health conditions in neighbors of wind energy facilities, as well as credible health experts who believe that wind turbines are causing illness in people living nearby. These include Health Department officials in Brown County, Wisconsin, who have asked for emergency state funding to evacuate families sickened by living near a wind farm. Health problems range from heart arrhythmias to headaches and ear pain. (See  Wind Spin: Blowing Holes in Industry’s Denial of Health Impacts.)

Despite this evidence and more, on July 10, the County's Department of Health and Human Services issued a review of literature on the subject which concludes breezily, “There are no direct pathological effects from wind turbines.”

ECM asked Public Health Officer Wilma Wooten for comment, but she did not respond.

The Department ignored and omitted the health problems experienced by the Manzanita Indians and other East County residents within the Department’s own jurisdiction.   In an impassioned plea to the County Dept. of Land Use and Planning, Manzanita Tribal Chairman Leroy Elliott implores planners to postpone a decision on the wind ordinance until after a health impact assessment study at California State University San Marcos on the tribe’s members is completed several months from now.

Proposed wind projects “will entrap Manzanita on our north and east borders,” Elliott writes.  “This combined with the existing commercially operational project along our southern border will create a cumulative effect that most likely tenders our residential reservation land uninhabitable.  We have been on these lands for thousands of years and we the Kumeyaay are the original stewards of San Diego County.”

Some of the literature listed in the County’s health position statement do in fact warn of very serious health impacts and include extensive documentation written by medical doctors. This includes Dr. Nina Pierpont, author of the book Wind Turbine Syndrome. One wonders whether those who wrote the whitewash actually bothered to read the extensive documents listed.

Studies cited include some that have been largely debunked for, like the San Diego study, relying on studies of prior literature by pointedly ignoring people who are ill in the communities where the studies were conducted.

The North American Platform Against Wind Energy (NAPAW) and the European Platform Against Wind Energy (EPAW) , which called for a moratorium against wind turbine projects, has warned that government-led wind turbine health “impact studies” are biased to support the well-funded wind industry whose lobbyists prowl the halls of city halls at communities where wind projects are proposed or built.

At a May hearing of San Diego’s Planning Commission, among the most compelling testimony came from Barb Ashbee, who traveled from Ontario, Canada to testify on behalf of Victims of Wind. The coalition represents hundreds of residents beset by serious health problems after industrial-scale wind turbines were erected near their homes. (View excerpt of her testimony: http://www.youtube.com/watch?v=Hwfb7awiSeQ&feature=youtu.be ) Numerous residents have been forced to leave their homes, she said, citing symptoms that include chest pain and pressure, earaches, dizziness, nausea, heart palpitations, inability to sleep, ringing in the ears, bleeding from the nose, headaches and hyperthyroidism. Most living within 4,000 to 5,000 feet of turbines.

“Some days our house was vibrating audibly; other days you can’t hear it. Some say if felt like organs were vibrating,” Ashebee said. “Ordinary families remain powerless…and continue to suffer in their homes.” Some have moved in with friends or relatives, or sleep in their basements.” She said that she and her husband both became ill, as did their pets. Ultimately they accepted a settlement from a wind company to escape the torture. “All of the symptoms disappeared when we moved,” she said.

Ashbee accused Ontario’s Minister of Health of ignoring known health problems in order to prepare a report on wind turbine health impacts that was favorable to the industry. Despite over 100 families reporting health problems, Ashbee said, “She didn’t do a health study. …She didn’t speak to any of the families. She knew about them.” She added, “In 2010 she released a cherry-picked literature review concluding there were no direct causal effects…She irreparably betrayed the public trust.”

The Ontario study has been touted by the wind industry worldwide. Iberdrola Renewables last week sent the study to East County Magazine to show a purported lack of evidence of any wind-related health problems.

Today, with even more turbines built, several hundred families have health problems and 80 municipalities in Ontario are calling for a moratorium on wind projects, Ashbee told commissioners.

Turbine health problems can stem from both audible and inaudible (infrasound) noise, as well as stray voltage.

As turbines grow ever larger--up to 500 feet tall with wingspans the size of football fields-- and are placed close to inhabited areas, health complaints continue to mount.

Tomorrow, planners will weigh whether to approve proposed land use and zoning changes that could allow numerous projects in low-income areas of East County such as Boulevard and Jacumba, as well as in environmentally sensitive areas such as Cleveland National Forest.

At the last meeting, support for the project came primarily from the wind industry itself and other vested supporters including SDG&E, Sempra, Iberdrola Renewables, Enel Green Power, Invenergy, Pattern Energy, Hamann Companies, Lansin Companies, J. Whalen & Associates and others.

The industry has contended that the project is needed to meet our region’s power needs and that there is no evidence to support health impacts.  The Ontario health study has been cited by Iberdrola even after Iberdrola representatives heard the testimony from Ashbee at the May Planning Commission meeting.

Testimony given at recent meetings by vested supporters, as well as the new health report, has sparked outrage in Donna Tisdale, Chair of the Boulevard Planning Group and President of Back Country Against Dumps (BAD)—and a vocal opponent of wind projects in her jurisdiction.

“Industrial wind proponents are either ignorant of the facts, are willfully blind to them, or are flat out lying,” a press release issued by BAD concludes, “which fits the description of constructive fraud.”

The wind ordinance is first on the agenda tomorrow at 9 a.m.  for the San Diego County Planning Commission at 5201 Ruffin Road, Suite B in the Dept. of Planning and Land Use hearing room.

Whatever decision planners make is expected to be appealed to the County Board of Supervisors, who will have the ultimate say on whether or not to welcome more industrial scale projects into rural and scenic areas in our region—or take the wind out of the industry’s proverbial sails.