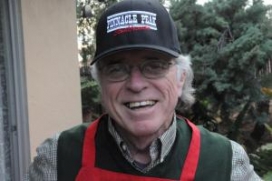 January 3, 2014 -- As many of you know, our cofounder of East County Magazine and our own "East County Eater" columnist Leon Thompson recently had open heart surgery to patch him up after years of indulgent eating clogged up his arteries.  Already a survivor of one heart attack, like many people in this situation, Leon was initially hesitant to undergo such a seemingly drastic procedure.

Five days after his operation, which wound up being a quintuple bypass, Leon  insisted that we bring our sound equipment to his room at Grossmont Hospital so that he won't miss a beat in recording for our radio show. For his return to the radio, we started out by interviewing Leon on his amazing recovery, which is an inspiration to anyone facing open heart surgery.

Hear for yourself how energetic he's feeling - and how he's already setting the pace for walking a mile a day around the recovery ward.

(Note: You can also read Leon's "Heartfelt Message" to our readers, penned along with a review of hospital food just days before his surgery, here: http://www.eastcountymagazine.org/heartfelt-message)