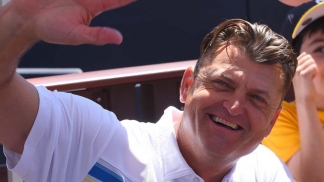 January 24, 2018 (San Diego) - The third time was charmed. Trevor Hoffman has been hurled into Baseball’s Hall of Fame.

The legendary San Diego Padres closer, who retired in 2010 after two years with the Milwaukee Brewers, was elected by the Baseball Writers Association of America in a vote announced Wednesday.

In his third year of eligibility, he received 79.9 percent of the votes cast by members of the Baseball Writers’ Association of America.

Hoffman was scheduled to speak at Petco Park at 4:30 p.m., where fans were being welcomed to attend, according to a Twitter post.

A year ago, Hoffman was fourth of the ballot, but missed being elected to the National Baseball Hall of Fame in Cooperstown, New York, by a tiny margin.

Hoffman’s name ended up on 74 percent of the 440 ballots cast, but needed 75 percent to gain induction.

“For me, falling short of this class is disappointing,” he said last year. “But I don’t take being on the ballot lightly. I’m grateful for every vote and I am truly humbled to have come so close.”

This year, a better result was expected for the 50-year-old who strode to the mound with AC/DC’s “Hells Bells” as his signature music.

“Unless something goes horribly wrong, it looks like he’ll be heading to Cooperstown this summer,” said fan site Gaslamp Ball. “According to the latest numbers from Ryan Thibodaux, who has been compiling and tracking all publicly available ballots, Hoffman has a solid 79 percent of the votes.”

Former San Diego Union sportswriter Barry Bloom, now contributing to mlb.com, wrote in November that earlier in 2017, the National League record-holder for saves (601) brought video crews to his house for the call. It never came.

“Hoffman earned a nice bump, but he missed by a scant five votes,” Bloom wrote.

But he said Hoffman’s chances this year were excellent.

“The six players who came within five votes or fewer were eventually inducted,” Bloom noted. “The last was Craig Biggio, who missed by two votes in 2014 before being elected the next year with 82.7 percent of the vote. It was also Biggio’s third year on the ballot.”

In November, Hoffman told MLB.com: “We don’t have big plans. I think that goes back to tempering of attitudes. We did it with the Pads earlier this year with the cameras there, and then you’re looking at the clock, watching the time slipping away. The hurt all goes away, but there’s still scar tissue.

“I figure that I might as well not worry about it, and if I get the call, I get the call. I’m not really worried about documenting it. We’ll see. We’ll see what we plan out.”

For years, relief pitchers were largely ignored by members of the Baseball Writers Association of America, with former Padre Rollie Fingers among the exceptions. Former Cub and Cardinal Bruce Sutter in 2006 became the first inductee as a pitcher who never started a game on the mound.