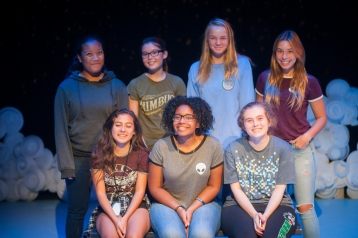 November 1, 2016 (La Mesa) - Happiness filled my heart at the sight of a full audience for the Highland players on Thursday night. The production ofAlmost Maine featured romantic, funny, and filled with awe moments. The show has closed, but if you fill the need to support or you did not get your Halloween fix, West Hills High in Santee is doing Zombie Prom this weekend.

For me, Almost Maine is a play of skits. Short vignettes which in thi case, showcased a lot of students--perfect for high school. Nine skits with two or three students interacted in different romantic scenarios, connected by the fact they live in "Almost Maine," a small town that never got around to becoming official. 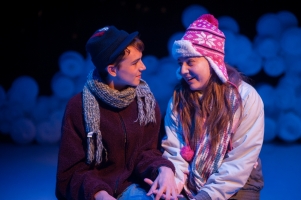 The cast I saw was so good I wished I could have see the other one to compare. Although romantic situations abounded, with most of the scenes involving kissing, the kids were so natural--no awkwardness. The students were quite believable and could have easily been the characters they portrayed. The students also brought of lot of laughter from the audience, not always so easy to do. Kudos to the Highland Players and Paul Reams.

One of my favorite skits was "They Fell." Luke Babbit and Keri Riddle were too funny. Twenty six actors put together two casts. Students who want to act are getting a great opportuntiny over at Helix, and doing a great job.Come out in the spring to see them at work.