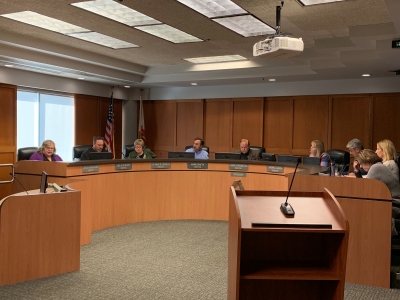 The District provides drinking water for over 273,000 people in the communities of La Mesa, Lemon Grove, El Cajon, Spring Valley and portions of Santee, Lakeside and San Diego County.

Two ratepayers, Larry Nichols and Gordon Place, spoke individually to express their concern with what they perceived to be overly generous benefits packages to District employees. Nichols expressed surprise with the District’s claim of a recruitment problem for staff. Place wanted the paid time off policy reviewed and underscored the need to have customers included in the review process because “benefits to employees affects the water rates which affect all of us.” 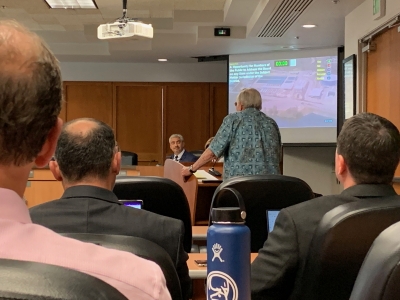 Next Year’s Budget Process: A Primer

The District is no stranger to heated debate when approving rate hikes, but months before a vote on the matter, the process of budgeting and determining any potential change to ratepayers begins.

Many factors impact this final decision and ratepayers are welcome to comment and participate in this process as it rolls out, rather than wait for the final vote where history shows there’s little room for change, regardless of how many people complain or protest.

The Board and staff held a lengthy conversation on budget factors ranging from general cost control, long-term guideless, factors specific to the next budget cycle, and calendaring of the budget process taking place between now and the end of the summer.

Rate hikes are usually the headline news of the budgeting process, however, that process rolls out over several months and includes review of the District’s expenses and anticipated ratepayer water needs. This meeting established the guidelines and principles District staff will use to project next year’s budget and ultimately any attendant water rate hikes. A “water rate projection workshop” is scheduled for May 15, at which time the Board and public will have a better sense of what rate hikes are anticipated for next year. Water rates are calendared for final approval in August.

District cost controls include: Maintaining operating cost increases close to the San Diego rate of inflation, which averaged 2.2 percent over the last eight years, compared to the District’s staffing cost increase of 2.4 percent. Additionally, all employees pay their full share of the employee contribution portion of their pension plan.

Capital maintenance and improvements are planned ahead of time to avoid emergencies which would cost ratepayers even more. Technology improvements are shepherded to increase efficiencies. A robust outsourcing policy seeks to reduce costs rather than complete projects and services using current staff. 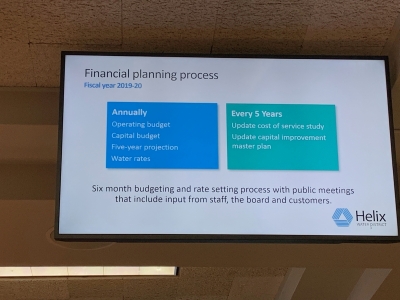 Notably, district staff report the current budget year was “exceptionally hot and dry,” but that the winter was “wet” with the “March snowpack reading in the Sierras at 120 percent of the average.” Rain results in lower demand on irrigation which lowered water sales for the third quarter. Though the fourth quarter, the staff report indicates, is usually dryer.

Other factors to water costs include increased water rates which are set by the SDCWA and the Metropolitan Water District of Southern California (MWD). Those increased will only be “partially offset by the quantity of local rainfall.”

The District’s strategic plan was finalized during the 2014-15 fiscal year and will “potentially” be updated in the upcoming fiscal year.

Employees agreements are memorialized in a memorandum of understanding with the employees’ association. The current four-year agreement is set to expire on June 30, 2019. A new agreement is being negotiated and will be in place for the next fiscal year. 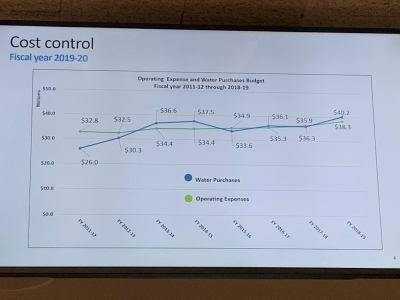 Historically, the District established infrastructure to collect local runoff in the mountains in site such as the Cuyamaca Dam and diversion sites called Diverting Dam and South Fork. These water sources are still in use today but are diverted to Helix’s storage account in El Capitan reservoir. From there, it’s pumped to the R.M. Levy Water Treatment Plan for treatment and distribution.

Local runoff saved the District money at a rate of $1,029 per acre-foot. An acre-foot is defined as the volume of one acre of surface, one foot deep. In the current fiscal year, the District is planned to use 900 acre-feet more than was budgeted, totaling 1,560 acre-feet or $926,000 in savings. The local runoff will result in a carry-over storage of 1,900 acre-free in El Capitan. The staff report indicates this will lower the need to purchase water by almost $2 million in the next fiscal year.

Almost half the District’s budget is for purchasing water from the SDCWA and MWD. The SDCWA has already indicated a rate increase of five percent.

California Public Employees' Retirement System (CalPERS) is the state agency that manages pension and health benefits for more than 1.6 million California public employees, retirees, and their families. The District has an unfunded liability of $41.4 million. In February, the District made a one-time payment of $5 million and scheduled four payments of $750,000. The District saves money by paying their monthly employer contribution in an annual lump sum.

In an effort to increase water supply reliability and increase local water storage capabilities, the District has budgeted $425,000 in FY 2019-20 for consulting costs to determine the feasibility of the East County Advanced Water Purification program, a project led by the Padre Dam Municipal Water District.

The Board discussed several legislative advancements which increase costs and which the District views as unfunded mandates. These include Senate Bill 998, which increases the time a customer is allowed to be delinquent before shut-off of services and prohibits such shut-offs for low-income families and those with health needs. Compliance is estimated to cost the District $100,000. Additionally, the American Water Infrastructure Act of 2018 requires risk assessments and plan updates, which the District anticipates costing $150,000.

Gracyk framed the cost associated with regulatory compliance as “a PR issue” indicating he doesn’t think the District should absorb such costs without communicating as such to ratepayers.

Ratepayers pay a portion of their bill towards a Rate Stabilization Reserve Fund which seeks to offset the need for drastic increases in water rates. Next year’s budget plans to budget five percent of water billing revenue towards this fund.

Many other factors impact the final cost to ratepayers. Interested parties should closely monitor the board meetings to stay up to date and provide commentary to the District. 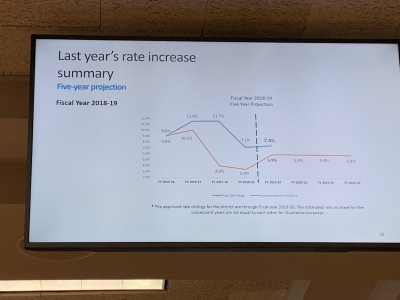 Major dates reviewed in this year’s budget process include:

May 1 and 2: Tentatively schedule to review with board the draft budget schedules.

May 15: Water rate projection workshop presented to the board.

May 31: preliminary budget documents distributed to the Board.

August: Bill insert with notice of increase mailed to customers.

January 1: Water rates effective on bills for water used in November and December.

Jennifer Yates described her waiver request from the perspective of “two middle income earners trying to build a home.” Yates purchased an undeveloped parcel in La Mesa. The property was partially developed as part of a larger residential subdivision project in 1960. All of the parcels were developed and water meters purchased, except for Yates’ newly-purchased parcel, though the water lateral was installed. Since the property has no history of services with the District, the District’s policy is to charge all fees associated with establishing new water services, including the disputed capacity fees charged by both the San Diego County Water Authority (SDCWA) and the District.

Despite Yates’ claim that her situation was unique, the staff report asserts, “Establishing new services to vacant properties within previous developed neighborhoods is not unique and are regularly addressed by planning staff.” Further, Engineering Manager Timothy Ross testified to the Board that he had handled a similar situation not “twenty minutes” before the meeting that day. That parcel owner paid all applicable fees.

The staff report further indicates there is no exception for a new user at a site not previously receiving water that will place additional demands on the system. Ross explained that this was not a set-up fee but rather a “buy-in” system that “charges for reserving capacity” on the District’s water supply. Fees are charged based on the size of the meter, per staff report. The relevant fees are only imposed “on users creating new demand on the system,” per staff report.

Board member Joel Scalzitti seemed frustrated with the staff presentation and was focused on what fees were paid in 1960. It was explained that there was no capacity fee then.

President Dan McMillan explained that such fees were not in place in the 1960s. McMillan advised that, previously, local municipalities and special districts enjoyed more robust funding until the passage of Prop 13 in 1978. Prop 13 was a voter-initiated state constitutional amendment which severely limited the taxes the state could charge on real property. McMillan explained that the capacity fee and other such revenue-raising schemes were developed as a need to fill funding gaps.

Per staff report, capacity fees range from $12,00 to $20,000. District counsel expressed concern with deviating from the established procedures, establishing a new precedent, and providing a “gift of public funds.”

The staff report indicates that the current property owner and representatives were advised on multiple separate occasions about the required fees, including capacity fees, approximately 45 days before the close of escrow. This information was given to their architect and contractor, also.

Yates, however, testified that this fee was an “unforeseen cost” which “could be a complete dream crusher” for her family. Yates explained that the money could cover the cost of her kitchen or the foundation, but that if she could not build a home there, then the district would get no money. Yates asserted the board policies were “too prescriptive” and unable to account for unique situations such as hers.

Yates tied her plea to the ongoing housing crisis in California. In her written request, Yates emphasized that state and local municipalities including utility organizations “are all on the same trajectory” to “reduce fee schedules in an effort to remove the cost prohibitive requirements to build new housing.” Yates also cited the recent move by the La Mesa City Council to pass “the most progressive ADU Ordinance in all of San Diego County.”

Ultimately, McMillan and board members Kathleen Hedberg and Deana Verbeke voted in favor of the staff recommendation to impose all fees. Board members Mark Gracyk and Scalzitti voted no.