Fundraiser a success, but more help is needed:  “wish list” provided for families who lost homes 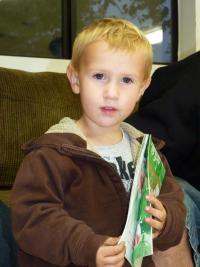 among nine families who lost everything in the Shockey Fire last month.  The home they were renting burned to the ground and they had no insurance.  But that’s just the latest in a string of tragedies for the Ritters.

“Dad died September 14,” Monica Ritter told ECM.  “His memorial service was Sept. 20 and on the 21st, our house burned down.”

ECM met the Ritter family at a fundraiser for Shockey Fire victims held last Friday at the Jacumba community center, where firefighters and community members turned out to raise $1,378.59.  The Buddhist Tzu Chi Foundation had already given over $3500 to the families during recovery after the fire—but now fire victims need additional help to rebuild their lives as the cold season draws near.

Ritter, who is disabled, was able to get her family and their dogs to safety, along with her most important possession: her mother’s ashes.  Everything else was destroyed.  The family learned from a reporter that their home had burned after evacuating to Golden Acorn Casino, where Ritter’s husband works.

“We need to have money. We bought a fifth wheeler, but it needs a lot of work to be ready for winter up here,” Ritter told ECM.  “We need dto get power to our property and get the fifth wheel fixed up so we can move in.”

Still, she is grateful her family is safe. “We’ve practiced evacuating, so he knew what to do,” she says of her young son, Ray. 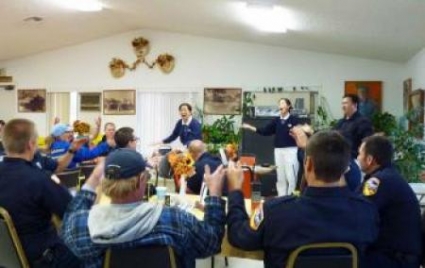 He misses his toys and most of all, one special item.  “I want to get my dirt bike back,” Ray told ECM. His Kazuma quad was lost to the flames. The family also lost their rooster, but saved some hens.

Lorrie Ostrander organized the fundraiser and has been lending a hand to her neighbors in need.  “There were three families with children who lost everything, and knowing that Christmas is around the corner I am in hopes that others who want to still donate will help bring happiness to the families,” she wrote in an e-amil to ECM.

She provided a wish list written by one mother and her son:

The fire took everything and I am needing a shower curtain with a rod, towels, sheets, pillows, window curtains, photo album, alarm clock, hangers, and bubble bath. My son, Michael, lost all of his sports equipment, football, baseball bat, glove and ball, and a basketball.  I am trying to put our life back together and a smile on his face.

Other families include a mother and her 10-year-old daughter.  A total of 9 families lost everything.

“I am sure that they, too, are in the need of household items and toys,” said Ostrander, adding that blankets, kitchen and bath items and other necessities are needed by those who lost homes. (Clothes are not needed at this time.)

One elderly resident, over age 80, is now living in a 20 to 30 foot trailer after losing a home, Ostrander said.  Some survivors had nothing but tents after the blaze roared through their quiet rural community.

“We will be there for these families, now and in six months or a year,” assured Peggy Joh, a volunteer with the Buddhist Tzu Chi Foundation.

The Foundation got involved as part of the National Voluntary Organization Active in Disasters’ San Diego chapter.  The Buddhist group has helped survivors during the 2003 and 2007 wildfires.   At first they provide emergency funds and later, help families to relocate and start over.  “If someone can’t pay for deposits for a rental home, a lot of times we can pay for that,” Joh said.

At the fundraiser, volunteers from Buddhist Tzu Chi led the crowd in songs.  People came from across East County and beyond.

“We still have food for them at the Campo Community Center,” Julie Atherton told ECM.  “We’ll take 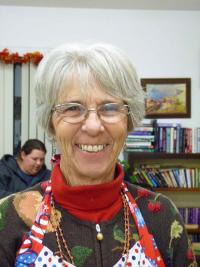 furniture,” she added, for any who have furnishings to donate.

Ostrander expressed gratitude to all who have helped.  “It was a wonderful turnout,” she said. “Our thanks go out to Peggy John and her volunteers a the Buddhist Tzu Chi Foundation.

For questions or to offer additional assistance, contact Lorrie Ostrander at marko159@att.net.