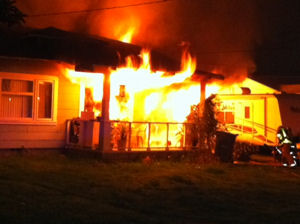 January 30, 2012 (El Cajon) – Help is needed a family with a child and two dogs, all displaced by an early morning fire at the home they were renting. The house, built in the early 1900s, may be a total loss and damage is estimated at $180,000 including contents.

“The couple renting this home did not have renter’s insurance and lost everything,” said Monica Zech, spokesperson for the City of El Cajon. “If anyone would like to help, please call (619) 441-1737.

At 2:47 Monday morning, Heartland Fire & Rescue resources from El Cajon, assisted by one engine from the San Miguel Fire Protection District, responded to a report of a residential structure fire at 656 Jefferson Avenue in El Cajon. As crews arrived, smoke could be seen coming from the home.

As firefighters were making entry into the living room the contents ignited and flashed – sending a pressurized flame front toward the firefighters. One firefighter sustained a minor burn injury to the back of his hand and was treated on scene.
One adult, one child, and two dogs were home at the time and were able to escape uninjured. The family of three and their two dogs are now displaced.
The Red Cross is now providing initial assistance to the displaced couple, their child and pets.
The cause of the fire is now under investigation, but the cause appears to be accidental in nature.