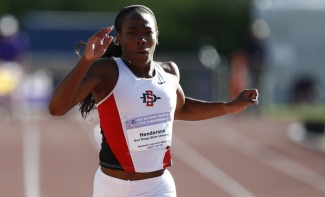 In the 100-meter dash, Henderson posted both a San Diego State and NCAA West Prelims record with an 11.01 time, placing her second behind Oregon’s Deajah Stevens, who clocked in at a wind-aided 10.89.

Freshman Andrenette Knight also earned a spot in the NCAA Championships with an outstanding performance in the 400 hurdles. She raced to a blistering 57.16 time, the third-fastest time in school history, to take sixth place and qualify for the national meet. Knight becomes the first freshman Aztec to qualify for the NCAA Championships since 2013 (Nicole Oudenaarden, heptathlon).

Henderson and Glenn moved on to the quarterfinal in the 200 meters, slated for 5:35 p.m. tomorrow. Henderson won the fourth heat and placed sixth with a 22.66 time. Glenn, meanwhile, crossed the finish line in 23.01 for 12th, eclipsing a collegiate best and ranking third in the program record book. Sophomore Lisa-Anne Barrow was 39th with a 24.12 time.

In the 100 hurdles, Auzenne also advanced to tomorrow’s quarterfinal, on tap for 5:05 p.m. She finished second in the third heat and was ninth overall with a wind-aided 13.17 time.

Alesi makes her second appearance of the meet tomorrow at 4:00 p.m. in the shot put’s first round. At the same time, sophomore Je’Neal Ainsworth competes in the first round of the triple jump and Auzenne, Glenn, Smith and Henderson (with senior Starlynn Singleton serving as an alternate) run the quarterfinal of the 4x100-meter relay. The quarterfinal of the 100 hurdles are at 5:05 p.m. and the 200 meters quarterfinal is at 5:35 p.m. The meet closes with the 4x400-meter relay quarterfinal at 7:25 p.m. run by Lea, Barrow, Knight, and McPherson (Glenn will serve as an alternate).

Women’s 100 Meters Quarterfinals (out of 23 entrants)

Women’s 100-Meter Hurdles First Round (out of 46 entrants)