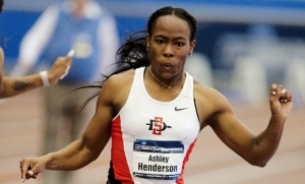 This is Henderson’s second weekly conference honor of the season

May 2, 2017 (San Diego) - San Diego State track and field junior Ashley Henderson was selected as the Mountain West Outdoor Women’s Track Athlete of the Week for her performance at the prestigious Penn Relays last weekend.

This is the third weekly conference honor of Henderson’s career and her second of the outdoor season. The St. Louis native was previously honored on March 28th for her outing at the Aztec Invitational. She ran the fastest 100-meter dash in program history and in the NCAA (11.10) up to that point and anchored the 11th-fastest 4x100 relay in the NCAA this season (44.40), which was third all-time in SDSU history, for second place at the meet.

Henderson became the first Aztec to win a track event at the Penn Relays when she won the 100-meter dash at the Penn Relays on Sat., April 29. Her 11.13 time, the third fastest on the weekend in the event and the 10th fastest in NCAA Division I this season, was just .01 second ahead of the second-place finisher, Jonielle Smith of Auburn. Henderson’s win was one of two for SDSU at the Penn Relays, as the Aztecs also won the Shuttle Hurdles Relay, San Diego State's first relay win at the prestigious meet.

Henderson also anchored the Aztecs’ 4x100-meter relay to a third-place finish at the Penn Relays (43.76), which raced to the fastest time for an SDSU team this season and was just .21 second off the school record, set by the same relay team last season.

San Diego State competes in its final meet of the regular season on Saturday, May 6 at the Oxy Invitational in Los Angeles.