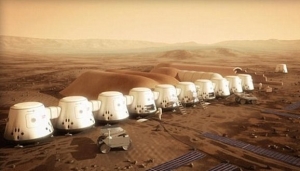 February 21, 2015 (San Diego's East County) - "Mars One" , a Dutch nonprofit, has announced plans to build the first permanent settlement Mars.  More than 200,000 people applied to join the first expedition of settlers on a143 million mile, one-way trip to the fourth planet from the sun.

Carmen Paul, a 32-year-old Air Force and National Guard member from Chula Vista is among 100 finalists from around the world, from whom just 24 people will be chosen. The trip won’t be blasting off until 2024,.

There’s one big downside:  no return ticket, due to the long distance and travel time.

“The large cut in candidates is an important step towards finding out who has the right stuff to go to Mars,” said Bas Lansdorp, Co-founder & CEO of Mars One. “These aspiring Martians provide the world with a glimpse into who the modern day explorers will be.

So why would anyone want to give up life on earth for a future on a Martian settlement?

Paul says joining a manned mission to Mars would be the “absolute pinnacle of human achievement,” the UT reports.  She describes herself as a courageous person who likes taking risks, but with military training in compute technologies and a witty sense of humor.

Mars One predicts the first crew of four will reach Mars in 2025 after a seven-month journey. The remaining crews will arrive in flights every two years thereafter. The cost for the first four will be an estimated $6 billion, funded with corporate sponsors.

According to the Mars One website, “Several months before the first human departure, the Mars One selection committee will determine which groups in training are ready to depart to Mars. It is expected that at least six groups will be ready for the trip. Because this mission is humankind's mission, Mars One has the intention to make this a democratic decision. The whole world will have a vote which group of four will be the first humans on Mars.”

Any chance we can enlist the political and industry advocates of wind and solar farms?
on a one-way ticket. I could think of a few choice options....corrupt politicians, serial sex offenders and crooked executives in the energy and banking industry might well head up that list if this were an unpopularity contest!
Seven months? A crew could never be supported for that long. Food, water and waste disposal cannot be provided for that long.