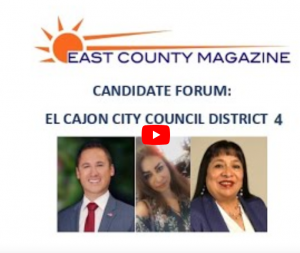 Scroll down to read highlights and excerpts of the forum, which covered a wide range of issues with questions from the public as well as the moderator.  Topics covered included racial justice and policing, homeless, housing and renters’ issues, the future of Parkway Plaza and the Magnolia performing arts center, COVID-19,  budget priorities, hate crimes, pedestrian safety/street racing, and more.

You can watch the full forum, recorded on Zoom, at  https://www.youtube.com/watch?v=7Z213Qn_Cyo&feature=youtu.be

The three candidates vying for the seat are (alphabetically) Estela de los Rios (D), Phil Ortiz (R), and Dunia Shaba (R). A fourth candidate, Billy Thigpen, did not participate. He has suspended his campaign and encouraged voters in the Nov. 3rd election to support Estela de los Rios.

The candidates have a wide variety of academic achievements. Each candidate has life experiences in business, academia, and their professional backgrounds that are to be considered as well.

Ortiz, the incumbent, was appointed by the City Council to fill the spot vacated by the resignation of Ben Kalasho in 2019.  He is an energy conservation professional. He says he has how the City Council works, championed projects and authored a code of conduct policy for elected and appointed officials in El Cajon.

Shaba, a professor and long-time El Cajon resident, was born in Iraq and has also worked there as a U.S. defense contractor. She is a firm believer in using education to help constituents, even as basic as knowing traffic laws. She is now pursuing a PhD degree.

All have long histories with the region, are graduates of SDSU, and served on or are active in a variety of professional and community organizations. All are residents of district 4. The district is comprised of the southern central portion of the valley from East Main Street, Magnolia Avenue and South Second Street.

Below is a link to their official candidates’ statement of qualifications.

Candidates were given two minutes to introduce themselves and then were each asked the same set of questions. The forum was civil.

Topics addressed included homelessness,  use of any future  COVID-19 CARES  Act monies, the city of El Cajon’s budget and pension funding, racial justice and policing, drag racing, Parkway Plaza’s future since being sold, views on The Magnolia (formerly E.C.P.A.C.) and candidates personal stance on opening businesses and wearing masks during this pandemic–all were among the topics addressed.

On racial injustice and policing, the candidates pointed out their main ideas on balancing the two.

De los Rios noted this is an issue that needs urgent attention.  She suggests creating an oversight committee, opening up more communication lines, and more training for the police on mental health awareness.

Shaba cited differences in policing standards over time, i.e. less community involvement by the police, along with cultural misunderstandings between what resident’s know about their rights. She suggests using education to increase awareness of how crimes are dealt with.

“This is a serious topic and it’s swept across our country,” said Ortiz. Ortiz noted that the law enforcement budget is vastly different, smaller, for El Cajon versus bigger metropolitan areas.

“While some of the criticism might be true, it might not apply to our city,” he said. He does not see “over-policing” as an issue. Ortiz says any kind of action should be  to push toward more funding for the police--- either for training, more officers to be bi-lingual especially for the middle-eastern population,  more programming, teaching newcomers what 9-1-1 is, and other ideas.

The city currently funds short-term funding, 30 days, for the homeless population. ECM asked--- do you think the city should fund a long-term program for the homelessness that is not faith based and is open to anyone?

Ortiz noted it is a complicated issue but suggested creating a model to partner with non-profit organizations that have experience with solving the homelessness issue and not create a new department for it.

“I believe it’s our city’s responsibility. We have enough taxes,” said de los Rios. “I’m pretty sure we have the budget and can allocate to make that a priority.”

De los Rios noted there are blighted areas and a lot of empty lots where homeless just live there.

“Owners need to be held accountable for those areas,” she said

She cited personal experiences of asking homeless individuals why they were homeless and was told fear of catching covid19, shelter curfews and rules, and more.

Shaba notes the correct assessments should be made of any given individual with rehabilitation offered and job training.

On the subject of Parkway Plaza, Shaba and de los Rios voiced support for keeping the landmark shopping mall but Ortiz expressed interest in making it a mixed-use property.  Any changes to the mall would require City Council approval.

“I believe we should go by strict C.D.C.  guidelines,” said de los Rios. “We should wear masks. We need to take the C.D.C. guidelines seriously,” she said, noting, “It’s not a political issue.”

Shaba said she personally hates masks and has to deal with asthma but agreed, “I do believe we should follow the procedures of the health guidelines.”  She believes businesses, if they follow the guidelines, should be allowed to reopen.

Ortiz thinks all business should be open but use precautions set in place.   He added, “Wear a mask.”

On use of any future CARES Act funding, Ortiz said, “We allotted, in the first round of funding, almost $1 million for rental relief, utility assistance, and food for seniors.”  He expressed interest in reaching out to other cities to see what they are doing and also reaching out to businesses for their needs to reopen and provide jobs again.

“Different cities spent it on different programs,” said de los Rios. “But there is more need. We do need more funding.  I also think we should have more programs to help the homeless.” Ending with “Create funding for these businesses to stay open.”

“I grew up in a war zone, “said Shaba. “Our priority was food and shelter.” While touching on the same mindset of the other candidates she also pointed out, “We need to clean the city.  I was driving by Mollison and there was a lot of trash.”

ECM asked if each  would commit to continue civic support of The Magnolia (formerly the East County Performing Arts Center) when it is able to reopen.

Shaba noted The Magnolia was seen as a plus for the city of El Cajon and also benefitted local restaurants and businesses with patrons’ money spreading out in the community when they visit. She also cited the diverse entertainment it has provided, thus far, to the community.

“We have to look at regulations. We have gone to developers and asked, ‘What can we do?’” said Ortiz. “Not a lot of land left in the community.” Ortiz cited a parcel of land near the MTS trolley that could be developed into housing or mixed-use.

De los Rios observed, “Every day we get calls. We have a tremendous need for more units.”  She cites increasing revenue as part of the solution.  “We need rent stabilization,” she said.

“Regulate new laws with landlords, Section 8 assessment and make sure people here have more priority than people who go to another state and then come back for section 8,” said Shaba.

A reader’s question asked if candidates believed landlords should bear the cost of treatments for bedbugs and mold that they are imposing on new tenants, when bugs or mold reappear within weeks after move-in.  ECM also asked if the city should hire more code compliant officers.

“There are a lot of inhabitability issues that I cannot begin to go on about, the mold, the bedbugs,” said de los Rios. “We only have two code enforcers.” She cited in the past there was only one.

“A lot of landlords refuse to treat cockroach issues,” said Shaba. “The housing authority should step up.”

“The city is cracking down on slumlords,” said Ortiz. “We’re taking it seriously.” He stated, “I’m going to work on anonymous reporting.”

ECM asked what each candidate’s budget priority would be in this era of limited funds.

Ortiz said public safety would be his top budget concern, along with the massive amount spent on pensions. “It is a massive amount that we have to keep a very close eye on. We refinanced our pension payments bringing it down from 7% to 3.5%; over the course of 20-30 years that’s going to save us from $70 million to $133 million,” he said.

“I would like to reassess our pension payments,” said de los Rios. She wants to protect pensions but is in favor of reassessing the situation.

“Public safety and crime prevention,” answered Shaba.  Additionally, she would like to promote education with the long term goal of creating more businesses.

Another reader question asked how candidates would reduce pedestrian deaths.

Shaba cited cultural differences in driving laws and not knowing the traffic laws.  “We need to educate and make them aware,” she said.

Ortiz cited “road diets” where streets are reduced from two to one lane, for drag racing issues, as a technique that has been used. Additionally, punish those who break the law to the full extent of the law. Ortiz earlier cited street racing as a key problem in District 4.

Candidates were asked by cohost John Sepulvado if they have ideas to reduce hate crimes and also holding those accountable?

“My concern is social media and that the Facebook are not taking a proper measurement (sic),” said Shaba.

Ortiz cited being chased out of a Santee grocery store in his youth. He was wearing a letterman jacket that had his name on it triggering the racial attack. Friends of his stood up for him.

“If you see something happening, stand up for your neighbor,” he said.

Whatever the outcome of the new district 4 election, one thing is clear:  the winner will be a member of a minority community.  Dunia Shaba has support within El Cajon’s Middle Eastern immigrant community, while Ortiz, the Republican-endorsed candidate and de los Rios, the Democratic-endorsed candidate,  are of Hispanic/Latino heritage.

Watch the full video for more information and visual responses.

Rebecca Jefferis Williamson  Is an award-winning freelance journalist and photographer who has covered a wide-variety of subjects ranging from civil protests,

community news and features to health issues including Covid-19, PFAS toxins, and Newcastle disease. Besides being a part of the East County Magazine team, she has freelanced for the San Diego Community Newspaper Group, Local Web Media, the Chula Vista Star News, San Diego Family Magazine, Military Press, and a number of other newspapers.