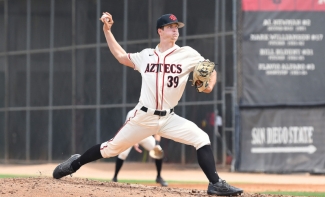 Hill turned in the longest outing by an SDSU pitcher this season, tossing 8.1 innings with only one run allowed on three hits and four walks, while striking out seven. Hill’s only run allowed was due to a two-run home run allowed by Jorge Fernandez in the ninth inning. Prior to that, Hill did not allow a New Mexico runner to reach second base.

Hill remains tied for the nation’s lead in wins with six and leads the Mountain West with a 1.28 earned run average.

Hill was quick to receive run support, as Joe Fitzhugh’s first collegiate RBI coming on a line-drive single to centerfield scored Julian Escobedo for a 1-0 SDSU lead in the bottom of the second. The Aztecs extended that lead further in the fifth, with Jacob Maekawa’s leadoff double setting the table for a Chase Calabuig RBI double and a Jordan Verdon sacrifice fly to extend SDSU’s lead to 3-0.

Two pitches after Hill was taken out after allowing a one-out walk in the ninth, New Mexico scored its first runs of the game with a two-run home run by New Mexico outfielder Jared Mang off SDSU reliever Jorge Fernandez. Fernandez managed to secure his sixth save of the season, however, forcing UNM’s Connor Mang to fly out to left and pinch-hitter Jeff Diemling to strikeout swinging to end the ball game.

SDSU welcomes Washington (13-11, 6-3 Pac-12) for a Monday afternoon contest at Tony Gwynn Stadium scheduled to start at 1:00 p.m. Justin Goossen-Brown will make the start for the Aztecs.