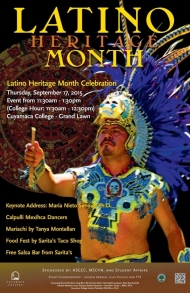 All of the events are free and open to the public. 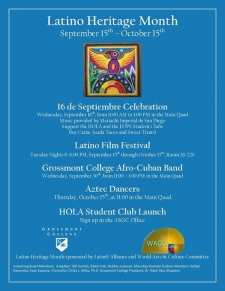 The Latino Film Festival explores Latino/a culture and history and is coordinated by the Latin@ Alliance, co-sponsors of Grossmont College’s Hispanic Heritage Month, along with the World Arts & Culture Committee. The Latino Film Festival runs from Sept. 15 through Oct. 13, and films will be shown at Grossmont College in Building 26, Room 220. All films are scheduled to begin at 6 p.m.

·         “The Book of Life” (about a young man torn between fulfilling the expectations of his family and following his heart) on Tuesday, Sept. 15

·         “Underwater Dreams” (about a ragtag team of undocumented immigrants who win a high school competition) on Tuesday, Oct. 6;

Other Hispanic Heritage Month events include:

Aztec Dancers will perform in full costume, and will explain the significance of their performance as it relates to the indigenous people that once dominated large parts of Mesoamerica from the 14th to 16th centuries.

Sept.15 was chosen as the starting point for Hispanic Heritage Month because it is the anniversary of independence of five Latin American countries. In addition, Mexico, Chile, and Belize celebrate their independence on Sept. 16, 18, and 21, respectively.

One year after Hispanic Heritage Month was established, Congressman Representative Dale Kildee of Michigan spoke for many when he noted that it not only recognized Hispanic-American contributions to U.S. culture, “we are also commemorating the growth of our Nation’s culture, vastly broadened and enriched by its Hispanic citizens.”