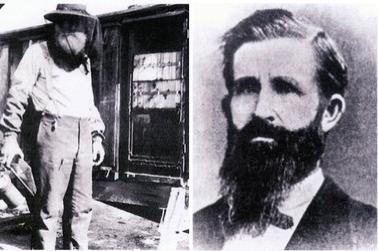 Harbison learned beekeeping from his father in Pennsylvania. When a drought hit in 1854, causing half his bees to perish, he tried his luck in the California gold fields.  Within a few years, he had started a thriving business selling bees first in Sacramento and later, San Diego, where he arrived in 1869.

Importing bees was a challenge in those days.  Many perished on ship voyages and a land crossing over Panama. Newspapers dubbed it “bee fever” as ship after ship came loaded up with hives.  Later, Harbison became the first to ship bees via the new transcontinental railroad and soon, business was buzzing.

He arrived in San Diego in 1869. Locally he partnered witht R.G Clark, harvesting crops and looking after the nursery they shared. The first apiary of Clark & Harbison was established on the R. S. Pardee farm, near what is now the town of Lakeside about nine miles northeast of San Diego.

The first honey was delicious, but Harbison and Clark didn’t know what flowers produced the pure, white honey.  So Clark set out to explore the county from the Mexican border north to Julian and all the way up to Riverside. He discovered that the best honey was produced from bees gathering pollen from mountain sages, Salvia mellifera, the button sage, and Salvia apiana, the white sage.

Harbison settled in what is now Harbison canyon, 23 miles east of downtown San Diego in rural East County.  He opened up the backcountry to beekeeping and in 1873, according to the San Diego Historical Society records, practically every farmer and many townspeople were in the bee business.”

By 1878, there were more than 23,000 bee colonies across our county; the Chamber of Commerce reported over 2 million pounds of honey was made here that year.  Beekeepers had so much success that California became the largest honey producer in the world–with San Diego the honey-making capital.

He also traveled  to Chicago and  began to sell honey to the East coast. The comb honey was famously from John. S Harbison himself, harvested in San Diego. This gave the city a great name and soon other beekeepers from San Diego were also selling honey nationally.

But the beekeeping business encountered some sticky problems.  Some had complained that bees were public nuisances in San Diego.  In 1871, the Legislature passed a no-fence law that protected farmers with crops from trespass by cattle or sheep—but the law failed to protect beehive keepers.  Besides conflict with cattlemen and sheep owners, beekeepers soon found themselves facing lawsuits from orchard owners who falsely claikmed bees were damaging fruits.

Then disaster struck.  Some fruit growers demanded that beekeepers leave and when they refused, vigilante growers armed with kerosene and matches descended on the hives at night and lit them afire. Harbison alone had 350 hives burned and destroyed another 700 himself to appease the violent fruit growers.

In addition, a new invention, the honey extractor, made it easy to extract and store liquid honey, which quickly surpassed comb honey, Harbison’s specialty in the marketplace.

By the late 1880s, Harbison had shifted much of his focus to orchards and real estate investments, though he still owned about 100 colonies when he died in 1912 at age of 86.

John Harbison wasn’t just a savvy businessman. He also contributed a lot to the beekeeping community. He developed new hives and tools to make his job easier and was the first to create the section honey box known as the Harbison hive. It inspired today's beehives and steered away from the typical design which was not bee friendly at all. He also founded the first beekeeping society west of the Mississippi, wrote papers and books on the art of beekeeping.

Today, his legacy lives on. California remains among the top five honey-producing states in the U.S., generating over $2 billion in honey last year, according to the U.S. Department of Agriculture.

San Diego County today is the third largest honey producing county in the nation, the San Diego Tourism Authority reports—a position that is poised to grow after County Supervisors recently passed a beekeeping ordinance aimed at boosting honey production. Several local cities have also passed new laws making it easier for residents even in urban areas to own beehives.

John Harbison is still remembered as king of the beekeepers, founder of a business that even today is buzzing with success.