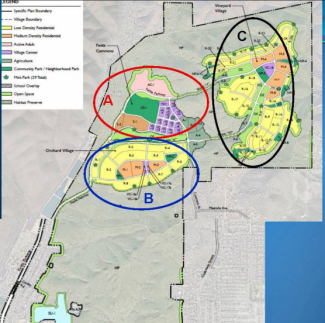 August 30, 2020 (Santee) -- Fanita Ranch, the 3,000 unit residential project planned for Santee’s northwest quadrant, is being delayed by developer HomeFed Corp. to make some significant changes, including removing an extension of a key arterial serving the project.

In a letter posted on the Fanita Ranch Facebook page last week, Jeff O’Connor, the company’s vice president, said HomeFed requested the delay “to remove the extension of Magnolia Avenue from the project in order to direct those funds towards the improvements to SR-52.”

O’Connor said over the past year it has become evident that “the most urgent and top priority for most Santee residents” is relieving the congestion on SR-52.

The Santee City Council, which was scheduled to hold a public hearing and vote on the Fanita Ranch specific plan Aug. 26, granted a delay on the project’s vote for some uncertain future date.

Van Collinsworth, who heads up Preserve Wild Santee, which has challenged past Fanita Ranch plans in the past and this most recent version, said HomeFed needed to delay the vote because it wanted to ensure one councilman can legally cast his vote.

O’Connor said by removing the extension, the possibility of a potential conflict of interest recusal will be avoided, and the funds for that extension could be added to about $10 million the developer has committed to spending on SR-52 improvements, bringing the total to $15 million. Those include adding an additional vehicle lane to both the westbound and eastbound directions, enhancements to the Mast Boulevard on-ramp, and moving the existing westbound bike lane to the eastbound side.

“Doing more for the 52 has been nagging at us,” O’Connor said.

Collinsworth noted if the Magnolia Avenue extension was removed, it could present a much greater danger for residents during a wildfire because it would eliminate a key evacuation route.

O’Connor also referred to another councilmember “who has consistently taken actions to stop our project prior to evaluating all the facts,” and inferred that person would also be ineligible to vote.

That would indicate Councilman Stephen Houlahan, who has criticized some aspects of Fanita Ranch, and was elected on a slow growth platform. But Houlahan has been careful to avoid stating exactly how he would vote when the issue comes up.

If both Houlahan and McNelis were deemed unable to vote, the Council would still be able to approve the project but the vote would have to be unanimous.

While both Mayor John Minto and Councilman Ronn Hall have made positive comments about Fanita Ranch in the past, Councilwoman Laura Koval’s position is less clear.

“I’m going to hold my thoughts on Fanita Ranch until we vote on it,” Koval said earlier this month. “I’m going to dig into this project, and go back to square one and look at how (the development) has changed over the years.”

Minto said he had no idea about HomeFed’s decision to pull the project, and was angry that his legal advisers didn’t deal with a possible conflict of interest earlier. “Quite frankly, how did somebody not see this sooner? How did those experts that we relied upon are just now coming to the realization that there’s a conflict?,” Minto questioned.

Asked about his position on Fanita Ranch, Minto said, “I don’t support it or not support it.”

He also said removing Magnolia Avenue extension wasn’t the best idea. But the bottom line, Minto said, is “this is their property, and they can do what they want with it.”

In 2019 O’Connor told East County Magazine that HomeFed planned to spend $35 million to $40 million on improvements to SR-52, which would make the highway much better than its current clogged condition.

“Our traffic studies conclude that for every car Fanita Ranch adds, we will add enough capacity on Highway 52 to handle four cars,” he stated. O’Connor said those improvements would be made before the first residents move into their homes.

Complicating the Fanita Ranch issue is the pending vote on Proposition N, the Santee General Plan Protection Initiative, which would require any new project that doesn’t conform to the General Plan to go to a public vote. Fanita Ranch exceeds the plan’s current density parameters.

Passage of the measure on the November ballot would mean Fanita Ranch would have to be approved by a majority of city voters.