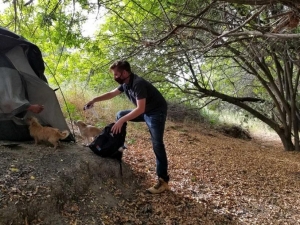 March 12, 2021 (Santee) -- The number of homeless people camping in and around Santee increased over the past year, according to a recent report given to the city.

At this week’s meeting of the Santee Community Oriented Policing committee, a representative from the San Diego River Park Foundation presented the results of a point-in-time count conducted last month.

The count, done over a week in February, focused on the San Diego River and adjacent areas and included the city of Santee.  It did not include direct contact with people because of the ongoing COVID-19 pandemic, said Jennifer Frey, program manager for the SDRPF.

The results showed an increase in homeless both in the San Diego River bed and Santee above the numbers tabulated in 2020. For Santee, the count that happened on  Feb. 19 and 20 found 55 people homeless, compared to 40 last year.

For the entire 15.5 miles of the San Diego River bed, from Santee to the Pacific Ocean, the count of homeless people came in at an estimated 201, compared to 158 in 2020, Frey said. Because of COVID, the counters estimated the occupants of vehicles and tents, Frey said.

For San Diego, where the majority of the homeless were found, the main reason for the uptick was due to a big increase in folks living in vehicles. “We counted more vehicles (that were occupied) this year than in the previous four years combined,” Frey said.

She didn’t provide any reason for the 37 percent rise in homeless residents within the Santee limits.

The homeless numbers haven’t escaped notice of Santee’s City Council, which launched a new program this month to address an issue that is confronting national, state and local governments.

“The city notified us that there was an uptick in homeless, and so we put together a similar program that we’re using in the unincorporated part of the county,” said Sgt. Michael Gonzales, who spoke at the COMPOC meeting.

The Santee Homeless Outreach Program and Engagement (HOPE) consists of a couple of Sheriff’s deputies and staffers from the county’s Health and Human Services Agency, the McAllister Institute, a nonprofit aimed at eliminating substance abuse, and Home Start, a nonprofit aimed at child abuse prevention and treatment.

While HOPE had a single outreach event earlier this month, the results are encouraging, Gonzales said. Of the 10 individuals contacted, nine accepted some level of services, which included food, clothing and hygiene packages, medical and mental health referrals, housing vouchers, and one assist for an animal that was in some type of distress, he said.

The team of professionals is under no illusion that they are going to end homelessness locally, but they are also well aware the more common approach used approach by law enforcement, citing or arresting, isn’t working, Gonzales said.

Brian Gruters, associate director for PATH, People Assisting The Homeless, a statewide nonprofit with an office in San Diego, said the latest point-in-time count by the river foundation wasn’t a surprise.

“Anecdotally, we’re seeing more people who have recently entered homelessness,” Gruters said. He added the most likely cause is COVID-19, and the fallout from so many people losing their jobs, unable to afford paying their rent.

“Even though we have a statewide moratorium on evictions, there are a lot of people who don’t know there’s a moratorium. The pandemic has resulted in fewer economic opportunities, and social networks proving to be not as strong as they once were,” he said.

PATH has partnered with the San Diego Regional Task Force on the Homeless to produce an annual count of the area’s homeless population, but due to the pandemic did not conduct the count with the task force this January.

In the 2020 count, the total homeless population for all of San Diego County was 7,619 including 3,971 unsheltered people, and 3,648 staying in some type of shelter. In Santee, there were only 25 unsheltered individuals counted, down from 35 in 2019.

That contrasts with El Cajon, which had a total of 784 unsheltered and sheltered homeless persons in 2020, nearly the same as in 2019 when the city’s total homeless count was 787.

Gruters applauded the newest outreach program initiated by Santee, saying that it is going to take innovative approaches to help get more people off the streets. Many folks who might be without a place to live for a short time may end up surviving for an extended period, which makes it harder for them to break the cycle, he said.

“The longer they’re without a shelter, the tougher it is for them to get off the streets,” he concluded. “The system doesn’t always work that well for a lot of people.”