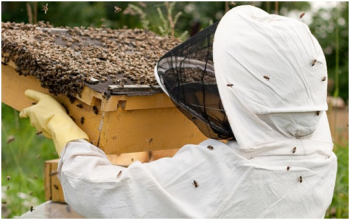 January 13, 2016 (San Diego’s East County) -- The U.S. Environmental Protection Agency this week issued a ruling that neonicotinoids used on cotton and citrus crops harm bees -- but the same pesticide used on other crops does not, Associated Press reports. Some bee experts have argued that neonicotinoids are a major cause of Colony Collapse Disorder (CCD). The controversial statement pleased neither environmentalists concerned over bee declines, nor Bayer, the maker of neonicotinoids.

June 30, 2014 (Washington D.C.)--Honey bees are vital for our food supply, since a quarter of all foods that Americans eat depend on pollination by bees.  But bee populations fell by 23% over the winter.