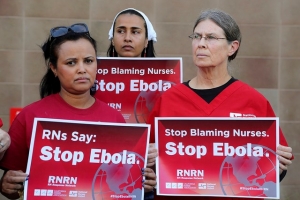 National survey finds 80% of nurses say their hospital has not communicated any policy on Ebola: 2,200 RNs across U.S. say hospitals still lagging

October 14, 2014 (Silver Springs, Maryland)--Following news Sunday that the first U.S. nurse has now tested positive for the deadly Ebola virus, National Nurses United called for all hospitals to have in place the highest standard of optimal protections, including Hazmat suits, and hands-on training to protect all RNs, other hospital personnel to confront Ebola.