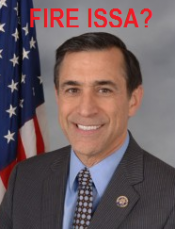 His opponent, Republican Darrell Issa, is the richest man in Congress and has become a national lightning rod for controversy. Issa chairs the powerful House Committee on Oversight and Government Reform, where he has launched repeated investigations into the Obama administration, while failing to investigate allegations of corporate wrongdoing that impact consumers.