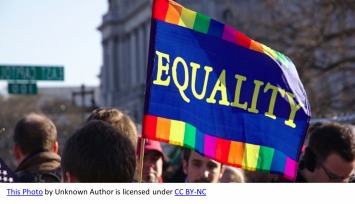 March 4, 2021(San Diego) – By a 224 to 206 vote, the U.S. House of Representatives has passed the Equality Act (H.R. 5) , a sweeping civil rights bill intended to prohibit discrimination against lesbian, gay, bisexual and transgender people in both public and private places.  But the bill will face an uphill battle in the Senate.

Congressman David Cicilline, an openly gay legislator from Rhode Island, offers this rationale for the measure. “In most states, L.G.B.T.Q. people can be discriminated against because of who they are, or who they love. It is past time for that to change.”

A landmark Supreme Court ruling in June 2020 found that the 1964 Civil Rights Act protects gay and transgender people from discrimination on the job, holding that the law’s ban on discrimination based on sex also applies to sexual orientation and gender identity. The Equality Act seeks to expand those protections for workers to also include protections for consumers at places ranging from stores to stadiums.

The bill also weakens the Religious Freedom Restoration Act which prompted the Hobby Lobby’s Supreme Court case over whether or not an employer should be able to refuse birth control coverage for employees based on the employer’s religious views. The Religious Freedom Restoration Act has been cited by businesses such as bakeries and photographers seeking to refuse service to same-sex couples at weddings.

The Equality Act passed the House with just three Republicans joining with Democrats in support of the measure.

The bill is supported by civil rights groups and by the U.S. Chamber of Commerce, as well as by many large corporations including Microsoft and Coca-Cola, the New York Times reports. It is opposed by conservative and religious groups for reasons that include concerns over religious freedom and impacts on girls’ and women’s sports.

Congresswoman Jacobs, a cosponsor of the Equality Act, indicated the measure is personal for her and her family. ““As the proud sister to a trans brother and a gender non-conforming sibling, and the proud representative of Hillcrest, the heart of San Diego’s LGBTQ+ community, I was honored to vote for the Equality Act. This historic legislation will be life- changing for so many of my constituents and for LGBTQ+ people across the country. No one should face discrimination because of who they are or who they love.”

She adds, “The passage of the Equality Act and the progress we’ve made wouldn’t have been possible without the work of all those who have marched, protested, and demanded equality for decades.”

But Congressman Darrell Issa criticized the measure. In a press release, he acknowledges, “Everyone should be treated with dignity and respect. In fact, our nation has never been more accepting of people’s uniqueness.” But he continues, “H.R. 5, however, is an extreme measure that abandons basic protections for conscience and neglects to protect the health and safety of our children.”

Issa claims the measure would strip away equal opportunities for women and girls in education and sports including Title IX protections. In addition, he states, “This legislation could force houses of worship and religiously affiliated schools, hospitals, non-profits and other entities to go against their beliefs.”

The Equality Act now advances to the Senate, where it will need 10 Republican votes along with all Democrats to gain a filibuster-proof majority of 60. So far, Susan Collins of Maine is the only Republican Senator to announce support for the bill.

time for issa to go!! back to jail that is!