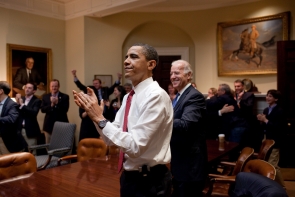 March 22, 2010 (San Diego’s East County) – By a 219 to 212 vote, the House of Representatives passed the landmark healthcare reform bill last night. The bill could be signed by President Barack Obama as early as tomorrow. Later this week, the Senate will consider amendments made by the House to a Senate version previously passed.

All Republicans voted against the bill (including local Congressmen Duncan Hunter, Brian Bilbray and Darrell Issa) despite efforts by the President to gain bipartisan support. Thirty-four Democrats also voted “no.” Local Democrats Bob Filner and Susan Davis voted for the measure.

“We will be joining those who established Social Security, Medicare and now, tonight, health care for all Americans,” said Speaker Nancy Pelosi. The final bill did not include a public option which polls have shown the majority of the American public would support. But proponents say that the bill establishes an important precedent that healthcare should be a right, not a privilege, and say future reforms can improve on the initial measure.

Rep. Jim Clyburn of South Carolina, the top-ranked African American legislator in the House, called the bill “the Civil Rights Act of the 21st century.”

President Obama, in a message to supporters, said that measure will help every American have access to “high quality, affordable health care coverage.” He added, “Every American will be covered under the toughest patient protections in history. Arbitrary premium hikes, insurance cancellations, and discrimination will now be gone forever.” He said the measure will reduce the nation’s debt by a trillion dollar, create millions of jobs, prevent families from going into bankruptcy over medical bills, and free workers to change jobs or start their own businesses without fear of losing healthcare coverage.

House Republican leader John Boehmer sharply criticized the bill. “One thing the American people wanted out of healthcare reform was lower costs,” he said, adding that Republicans proposed a “common sense” alternative that majority party leaders would not allow to come to a vote. He faulted the Democrats for “ushering in a massive expansion of government” done with “arm-twisting and backroom deals.”

The bill also drew criticism from some on the left. Physicians for a National Health Program issued a statement today likening the bill to “aspirin dispensed for the treatment of cancer” because it does not include a national health insurance or single-payer system such as those in Canada and Europe. Despite some expansion of coverage, the bill will leave 23 million Americans uninsured and will require middle-income earners to buy health insurance from private insurers. Workers with employer-based coverage will remain locked into those policies while they remain employed (but will gain portability to have coverage when they leave). PNHP also faulted the bill for reducing Medicare payments to safety-net hospitals.

The National Organization for Women faulted the President for striking a deal with anti-choice Democrats to win passage of the bill. Yesterday, the President agreed to issue a signing statement clarifying that no government funds will be used for abortions under the measure.

Ultimately, the healthcare reform bill is neither the national healthcare-for-all panacea envisioned by liberals nor the socialist/government takeover of healthcare feared by conservatives.

For a detailed analysis of what the bill will actually do and a detailed timetaable for implementation of nuermous changes, see our in-depth coverage titled “How the healthcare bill may impact you, your family, and your business” at http://www.eastcountymagazine.org/node/2970.

that was good new ,happy to heard that
http://www.heelfancy.uk.com

I am a little sad that if I see in history, many such great bills in different domain have been passed but when it comes to real implementation, we see a clear ignorance and laziness from our government side.
Goa Travel

This was indeed a great historic day and I think this historic health reform bill will bring a great impact on the lives of the people. At GP LOCUM a similar discussion was going on.

Last I checked the news, it appears 10 attornies general plan to file lawsuits to block this bill's implementation in their respective states.

Florida, Alabama, Nebraska, North Dakota, Pennsylvania, South Carolina, South Dakota, Texas, Utah and Washington are the states listed as filing suit.  Some object to costs and others view this as a state's rights issue, from what I've seen.  While most are conservative states not noted for doing much to help people get better or more affordable healthcare, it is interesting to see Washington state on the list. Washington state has one of the most liberal laws on the books as far as requiring insurers to cover any licensed practitioner - such as naturopaths, accupuncturists, etc.

California's AG, Jerry Brown, has not joined the suit.

So what do readers think?  Is this just sour grapes, or should states have the right to tell the federal government it can't legislate healthcare reforms?

Anothere question not addressed yet is the question of whether states should be free to enact even broader reforms than Congress -- for instance what if California wants to enact universal or single payer healthcare?