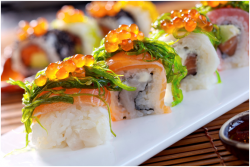 Becker said radiation washed into the ocean would be "so dispersed due to volume" that he does not expect to see problems with seafood contamination. He added that there is no concern with Japanese products already on store shelves. "I don't think thre is any reason if you see things on the shelf from Japan not to buy them."

The European Union has advised its 27 member nations to inspect foods from Japan and notify the EU if contamination is found. The EU imported 9,000 tons of fruits and vegetables from Japan last year as well as a small quantity of fish.

In the United States, Japan’s food imports account for less than 4 percent of the food brought into this county. Its main imports are seafood, processed produced, and snack foods. According to a report in Bloomberg Businessweek, the FDA and U.S. Customs and Border Protection have the authority to police imports at ports.

Nuclear reactors at Japan’s Fukushima power plant, meanwhile, continue to discharge radioactive materials into the atmosphere as a result of the massive 9.0 earthquake and tsunami that devastated the nation last week. Explosions and fires have occurred as the reactors repeatedly overheat due to failures of cooling systems. Now Japan authorities have admitted reactor core failures and partial meltdowns at several plants, as well as exposure of spent fuel rods. Radiation levels that are dangerous to human health have been detected 30 km away from the plant, with trace radiation as far away as Tokyo.

Nuclear expert at San Diego State University, Murray Jennex says “Any farms right around that plant are going to become suspect, “ so inspecting food items produced there “ makes sense.” As for seafood, he said, “They will probably do surveys in the ocean before they allow people to harvest fish there.” He added that the highest concentrations of radiation would likely occur in bottom-feeders such as lobster and shrimp.

Ingested nuclear radiation particles can pose greater dangers than air-born radiation, experts have indicated. After the Chernobyl nuclear disaster, many of the most serious health problems occurred in people who consumed milk from cows that ate radioactive grass, for example.

MSNBC reports from Singapore that “radioactive materials spewed in the air by Japan’s earthquake-crippled nuclear plant may contaminate food and water resources, with children and unborn babies most at risk of possibly developing cancer.” Radiation cause mutations in DNA, which can in turn cause cancer.

The state and federal government both have monitoring along the West Coast and thus far, no increased radiation levels have been detected, the state's leading emergency preparedness experts assured in a conference call with media today.  Although the United Nations has projected that a radioactive plume from the struggling facility, according to United Nations projections, could reach the Aleutian Islands on Thursday and hit Southern California late on Friday, health authorities here unanimously assured that any increase would be far below concern for human health due to the great distances involved.  Some likened it to the temporarily elevations one encounters when flying or undergoing a medical procedure.

“The safety of all Californians is our highest priority, and we are in constant contact with the federal agencies responsible for monitoring radiation levels across the West Coast,” said interim director of the California Department of Public Health, Dr. Howard Backer, and acting secretary of the California Emergency Management Agency Mike Dayton, in a joint statement.

ECM contacted corporate offices at Vons, Wal-Mart, and Henry’s Marketplace earlier this week to inquire whether the chains are taking any steps to protect consumers against nuclear contamination of food products. None returned calls. However one local grocer, who asked not to be named, said that Japanese foods sold in his store are primarily dry goods packaged prior to the disaster.

Concerns have also been raised about non-food items from Japan ranging from cars to electronic components. Most factories lie outside of the area currently within the evacuated areas, however some experts have indicated that the Japanese government and manufacturers may ultimately need to certify that exported items have been inspected and shown to be radiation-free to ally concerns of governments and consumers around the world.