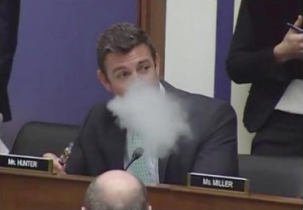 “This bill is the way forward for smokers who want to quit smoking and vapers who enjoy vaping,” said Representative Hunter.  His press release on the ‘groundbreaking legislation to better regulate vaping and set industry standards’ focused on how the bill would help benefit businesses trying to supply these e-cigarettes, but  does not address potential dangers of  e-cigarettes.

During his most recent Congressional campaign, the Tobacco PAC contributed $16,511 to Hunter. In a recent San Diego Union-Tribune article on Hunter’s latest campaign spending, Hunter aide Joe Kasper states, ““Hunter holds events at cigar lounges and has raised money there.” (Kasper sought to confirm the legitimacy of campaign spending on tobacco lounges and Las Vegas trips after Hunter repaid his campaign $60,000; the Congressman is under federal investigation by the Justice Department for allegedly spending campaign funds for personal use.)

The large tobacco industry donations raise the question of whose interests Hunter is representing:  consumers or tobacco companies?

Hunter states that the ‘Deeming Rule’ bill made by the Obama administration will destroy multiple vaping businesses due to the processes being long, burdensome and expensive.

The new bill that Hunter is proposing will reverse the effects of the ‘Deeming Rule,’ which currently allows the U.S. Food and Drug Administration (FDA) to review ingredients of e-cigarettes and vaping devices before they can be sold.

A big point missing from Hunter’s press release is that, according to smokefree.gov, e-cigarettes are not regulated, meaning there is no requirement for the makers of said e-cigarettes to disclose information on the chemicals used to create the product to the public. Combined with Hunter’s goal of taking away the FDA pre-market oversight by reversing the ‘Deeming Rule’, e-cigarette makers could release unregulated products that can harm the user.

Hunter has argued that since not all e-cigarettes contain tobacco, they should not be regulated like cigarettes. However e-cigarettes do contain nicotine, one of the most addictive substances, and many contain other harmful chemicals such as glycol and glycerin, two food solvents that when vaporized become carcinogens.

Multiple Professors of Psychiatry and Behavioral Science have argued about whether e-cigarettes are effective replacements for smoking. However, nearly every professor has agreed that it’s far too early to determine what adverse affects the chemicals in e-cigarettes have on the body long-term.

Hunter argues that e-cigarettes help smokers quit and says they helped him get off of cigarettes, though he continues vaping e-cigarettes.

The Surgeon General, in a December 2016 report, has also raised concerns about accessibility of e-cigarettes by children, attracted by flavors such as bubblegum. The use of these e-cigarettes more than doubled from 2013 to 2014 among young adults of the age of 18-24 years old.   Long-term impacts on teenagers of exposure to chemicals and nicotine are of particular concern to public health professionals.

Hunter, a long-time advocate of increasing rights for smokers, once vaped an e-cigarette on the House floor in protest over a bill related to vaping on airplanes.

Hunter’s bill has not yet been set for hearing in committee.

The article written by Jordan Damond was well thought out and back by great facts to the point I will follow him and I hope he continues to give insight on what's really going on behind all the bs in politics.