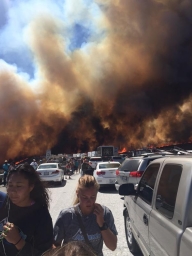 July 18,2015 (San Bernadino County) – A fast-moving brush fire roared out of control yesterday in the Cajon Pass in San Bernadino County, trapping vehicles on the I-15 freeway along the main route from San Diego County to Vegas.  The blaze destroyed two semi-trucks and 18 other vehicles, damaging 10 more.  TV footage showed people fleeing along the side of the freeway and some vehicles turning backwards in what some have dubbed "Carmageddon."