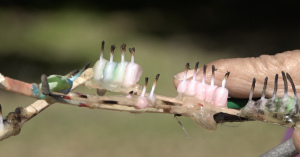 January 13, 2020 (San Diego’s East County) – An East County Magazine investigation back in 2012 led to the State Fire Marshal to issue a bulletin advising that sky lanterns are illegal—and dangerous. Our story led to removal of sky lanterns from local Walmart shelves.

But not everyone is aware of the ban, so use of sky lanterns, which are popular for celebrations in some cultures, continues. The devices include one or more candles sent aloft beneath an open cloth, much like a hot air balloon, posing severe fire hazards.

ECM news partner 10 News reports that on Saturday, an Alpine family on Japatul Valley Road awoke to find their horses terrified and one horse injured.  In dry brush nearby, they found remnants of a sky lantern with birthday candles attached to popsicle sticks.

“Thank God it didn't start a fire, but it could have," Lucy Olivier told 10 News.

The station also reported on a New Year’s Day incident in San Carlos, where a family found burn marks on their roof caused by a sky lantern.

ECM launched an investigation in 2012  after a reader complained about dangers posed by sky lanterns. Our report led to Walmart pulling sky lanterns off store shelves. We alerted Cal Fire and San Miguel Fire to the danger and within days, the state fire marshal issuing a bulletin indicating existing state laws prohibit use of fire lanterns.

A fire or other injury caused by a sky lantern could result in prosecution to hold the individual who released the lantern liable for damages caused. A person who causes harm via a fire lantern could also be subject to criminal prosecution.

Specifically, these statutes can be used for enforcement by the state:

Code of Regulations Title 19, Section 3.14 "No person, including but not limited to the State and its political subdivisions, operating any occupancy subject to these regulations shall permit any fire hazard, as defined in this article, to exist on premises under their control, or fail to take immediate action to abate a fire hazard when requested to do so by the enforcing agency." Note: “Fire Hazard” as used in these regulations means any condition, arrangement, or act which will increase, or may cause an increase of, the hazard or menace of fire to a greater degree than customarily recognized as normal by persons in the public service of preventing, suppressing or extinguishing fire; or which may obstruct, delay, or hinder,. or may become the cause of obstruction, delay or hindrance to the prevention, suppression, or extinguishment of fire.

Health and Safety Code, Section 13001 - Causing Fire, Misdemeanor Every person is guilty of a misdemeanor who, through careless or negligent action, throws or places any lighted cigarette, cigar, ashes, or other flaming or glowing substance, or any substance or thing which may cause a fire, in any place where it may directly or indirectly start a fire, or who uses or operates a welding torch, tar pot or any other device which may cause a fire who does not clear the inflammable material surrounding the operation or take such other reasonable precautions necessary to insure against the starting and spreading of fire 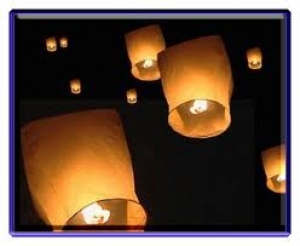 In 2017, after several sky lanterns were found in the Lake Morena area, a Lake Morena fire official reaffirmed that firing off such devices is illegal.

At least 30 states have banned use of sky lanterns due to fire danger.

Sky lanterns, which include a candle sent aloft beneath an open cloth, operating much like a hot air balloon, have actually caused many fires and other problems when they came back to earth. Wildland Fire has documented many of these incidents:

See our prior coverage on sky lanterns: