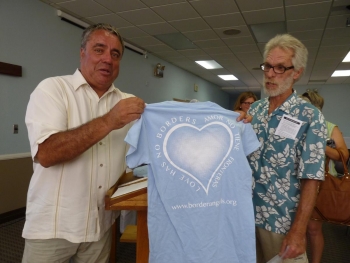 August 24, 2014 (La Mesa)--Parishioners and guests at the United Church of Christ in La Mesa lined up to purchase T-shirts proclaiming “Love has no borders,” after hearing an impassioned presentation on the plight of border children August 17th.

“Everybody looks to the president or the mayor. But what can we do?” Morones asked.  He emphasized that the Central American refugees are fleeing to numerous nations, not only the United States.