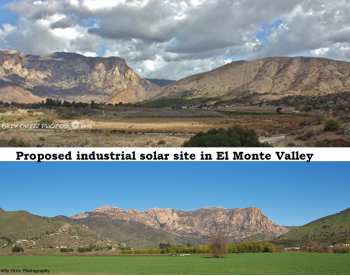 “Everyone I have talked to too is against it for many reasons.” says photographer Billy Ortiz. “My reason is El Monte Valley is and should always be a scenic corridor, period.” He posted photos of the proposed site and drew some strong responses.

Susan Flynn, granddaughter of famed environmentalist John Muir, wrote, “They have already ruined the valley below the San Vicente Dam.”

Her remark refers to Sunrise Powerlink, which built over the objections of many residents. San Diego Gas & Electric paid a large fine for failing to notify Lakeside residents about a route change that ran the high voltage power line through El Monte Valley, a designed county scenic view corridor. The solar project, if built, could tie into the Powerlink that many here feel was built without residents even having an opportunity to provide input.

Flynn is adamant: “El Monte Valley is beautiful and unique and it IS a historic part of Lakeside and should concern us all.”

Angeloa Magdoleno-Eylander voiced sadness at the news. “Why does man have to ruin everything!?!” she asked.  “It is so beautiful and peaceful looking.”

La Mesa resident and outdoor enthusiast Craig Maxwell called the valley “one of the most beautiful places  in the near East County. This cannot happen. Please tell us how we can help.”

Dorothy Toston Combs reflects, “It is just so sad that this place is going to be changed.”

To which long-time Lakeside resident Tricia Diegenan counters, “Not a done deal. Come fight for it.” She noted that various “bad” plans have been proposed for the valley through the years ; many such as recent proposed sand-mining project have been unsuccessful due to the vocal efforts of residents.  “Let’s not give up!”  she said, urging residents to “speak your mind” at the Lakeside Planning Group meeting. “I am not against solar,” she made clear, but added that in El Monte Valley, it should only be on roof tops or roadways, not open land.

Some voiced frustration with the system and with their elected officials.

Torrie Ann Needham wrote simply “As pretty as anywhere else on earth…Government doesn’t listen to the people anymore.

To which Digenan pointed out, “Freedom is not a guarantee. It’s fought for.”

Several residents faulted the landowner.  Ortiz states, “The land owners are looking for a way to make money without working the land as their father did before he died.” He added that the father used to let agricultural students from El Cap High School plant oat and hay on this plot of land to earn money from their school. He criticized the son for taking away from our Lakeside kids.”

Linda Christopher Watson summed up her view of the problem in a single word: “Greed.”

Solar is touted as a solution needed to help California meet its mandate for renewable power and reducing greenhouse gas emissions. But increasingly, residents in rural areas are asking that solar be put on rooftops and parking lots -- closer to urban areas where the demand for power is highest -- instead of despoiling some of the last and most pristine views left in San Diego's inland region.

Not "viable?" Hmmm. Maybe what they really mean is that they're not politically viable. In other words, rooftop solar panels are installed incrementally, in a piecemeal fashion as building owners or developers see fit. They can't be claimed or boasted about by anyone--power companies or politicians--as successful, legislatively inspired clean energy project "accomplishments." And that, after all, is what these wilderness destroying, animal killing monstrosities--wind farms and solar farms--are all about anyway; not cleaner air or reduced carbon emissions (neither of which they accomplish to any significant degree) but, rather, conformity to utterly arbitrary, state imposed green power mandates. Washington and Sacramento demand that a certain percentage of power must come from renewable sources, regardless of their cost, practicality, or ultimate effect on the ostensible goal of renewable power: reducing greenhouse gas emissions. And so the politicians and bureaucrats set to work, eager to burnish their environmental badges as saviors of the environment. How ironic. For them, "saving" the environment is destroying it.
El Monte Valley is my top near East County favorite for scenic beauty. Public officials rubber stamp rooftop and parking lot solar as not being "viable" alternatives. Why not? I just went to the Walmart in Kearny Mesa and they have a multitude of solar energy panels that also act as shade panels in their parking lot. Likewise for Santee Lakes at their RV storage area that supplies energy needs for their campers and business right where it's needed. Same for our Santee Kohls that has solar panels on their rooftop that supply a large percentage of their energy needs right where its needed. Instead, these officials support destroying scenic areas the public holds dear to their hearts as the superior "viable" alternative. That type of reasoning just doesn't make sense to me.