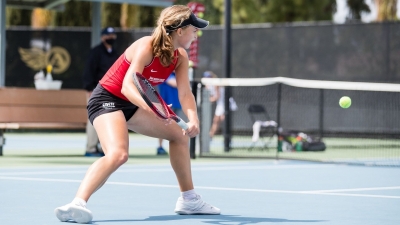 April 3, 2022 (Fresno) - Playing without two starters for the second consecutive day proved to be too much for the Aztecs as Fresno State snapped San Diego State’s five-match win streak with a 4-2 decision Sunday afternoon.

A highly competitive match between the only two undefeated teams in Mountain West Conference action played out for nearly 4 1/2 hours with the Aztecs missing seniors Bunyawi Thamchaiwat and Regina Pitts due to injury.

“We showed great fight today and I am very proud of our effort today,” San Diego State head coach Peter Mattera said. “This was a really good college tennis match. I am hoping that we get back to full strength soon.”

Thamchaiwat is a perfect 9-0 this season playing at the top of the singles lineup and has teamed with Tamara Arnold at number one doubles to record an 11-2 record. Thamchaiwat is currently ranked 83rd nationally in singles and along with Arnold is 51st in the doubles rankings.

Meanwhile, Pitts owns a 5-3 record in singles action, all at the number four spot, and has played with various partners to see doubles action in 13 of SDSU’s 14 matches entering the day, posting a 6-5 mark with two no decisions.

That meant the Aztecs needed to play nearly perfect tennis Sunday, and it looked for a while like that might just be the case. Even after dropping the doubles point, San Diego State won the first set on four of the six singles courts, but in the end it was unable to extend the program’s longest win streak since 2013.

Fresno State scored the first team point of the day, winning matches at number one and two to secure the doubles point.

On court one, Pang Jittakoat and Matilde Magrini defeated Alicia Melosch and Cécile Morin 6-2. The Aztec pair has played together five previous matches this season, all at the number three position, but played up today due to injuries.

The Bulldogs clinched the point at number two doubles. The Fresno pair of Carlotta Nonnis Marzano and Carolina Piferi were victorious over Nnena Nadozie and Julia Jordan 6-4. This marked the debut of the Aztec pair playing together this season.

Playing without two starters meant that the Aztecs shifted their lineup up. Tamara Arnold, who has been named Mountain West Conference Player of the Week twice this season, has been a staple at number two in the lineup. Today, playing at the top of the singles draw, she suffered her first loss in more than a month, falling to Jittakoat 7-5, 6-2. The loss snapped Arnold’s six-match win streak.

Moments later, the Aztecs cut the team deficit to 2-1, with Nadozie posting a 6-1, 6-3 straight set victory over Magrini on court two. The senior won for the fourth straight time and improved to 8-4 on the campaign.

Next off was court six, where Piferi defeating Agustina Rimoldi Godoy 6-1, 7-5. Rimpoldi Godoy, in the lineup due to injuries, recorded her first singles result of the season. She played in each of San Diego State’s previous two matches, but her singles match was not played to conclusion because the Aztecs had clinched the team victory.

Trailing 3-1, the Aztecs needed to win the next three matches. Melosch got San Diego State off to a good start with a 6-1, 4-6, 6-0 victory at number three singles over Cristina Flaquer. The senior won for the sixth consecutive time and won her second three-set singles match of the weekend.

On courts four and five, the singles matches played out very similar and at nearly identical times. San Diego State won the first set on both courts by a 6-3 score, with Fresno State taking the second set. Court four proved to be the clincher for the Bulldogs, with A.C. Hummel rallying for a 3-6, 6-2, 6-3 win over Morin.

San Diego State travels to Las Vegas for a pair of neutral site matches next weekend. The Aztecs will face Wyoming on Saturday and Colorado State on Sunday on the UNLV campus. Both matches are slated to start at 9:30 a.m.