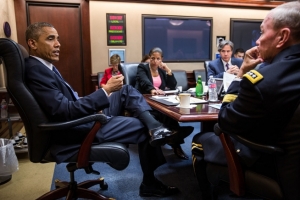 President Barack Obama last night authorized the use of force against the Islamic State of Iraq and Syria (ISIS), the Al Qaeda splinter group that has renamed itself the Islamic State.  The President also authorized humanitarian aid for victims of ISIS forced to flee their homes or be killed, including persecuted Christians and other religious minorities. The President made clear however that he will not authorize ground troops in the conflict.

Locally the announcement drew praise from Mark Arabo, CEO of the Neighborhood Market Association and a national spokesman for Iraqi Christians.

​"​Our work that began seven weeks ago in Congressman Juan Vargas’ office has resulted in a crescendo of tears, smiles and joy throughout the ​entire Iraqi Christian community​," Arabo said, referring to a Congressional resolution authored by Vargas and drafted by Arabo calling for humanitarian aid.