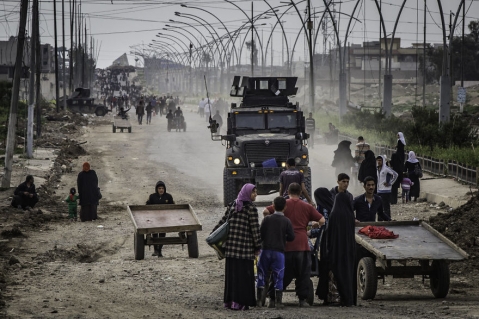 July 4, 2017 (San Diego’s East County) -- East County Magazine has obtained dramatic photos from the Battle of Mosul, taken in the Iraqi city during April 2017 by photographer Kainoa Little, who specializes in photographing war zones and refugees.

His images show Iraqi federal police fighting to free Mosul from occupation by Islamic State, or ISIL, militants who seized the city in June 2014.  The photos poignantly depict the courage of soldiers and at times, fear, as they fight amid the ruins and also the anguish of residents and refugees fleeing the city.

The battle captured in these April photos continues, with the allies gaining ground. Today, Iraqi Prime Minister Haider al Abadi held a press conference to praise his troops for a “big victory in Mosul” including retaking what remains of the al-Nuri mosque in the old city, Associated Press reports.