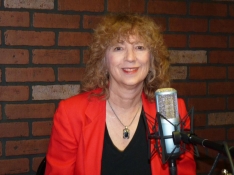 July 31, 2015 (San Diego) – East County Magazine picked up three more awards from the Society for Professional Journalists San Diego pro chapter last night during the annual awards banquet at the Bali Hai restaurant.   Two of the awards honor coverage on our East County Magazine Show on KNSJ Radio while the third is for an investigative report at our online news site (www.EastCountyMagazine.org), bringing our total awards to 83 since our founding in 2008.

Last night’s honors, all second place awards presented to Miriam Raftery (photo, left), include our radio interview series with local Chaldeans’ efforts to halt genocide in Iraq, a radio interview with a Kurdish woman about her family’s ordeal fleeing ISIS, and an online investigative report on a San Diego company’s failure to disclose negative impacts of a proposed energy project.

You can read and hear our award-winning entries here: