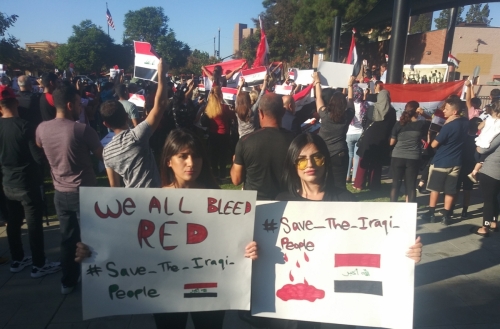 Dozens dead, estimates of injured range from 600 to nearly 1,200

Photo: Maryam Deuge and Mina Abdelahad want Iraq to have water, food, electricity, internet and jobs, and an end to widespread corruption

October 4, 2019 (El Cajon) - “Over the last 24 hours all these people in Iraq are dying,” Mina Abdelahad told East County Magazine at an impromptu rally yesterday in downtown El Cajon following reports of brutal crackdowns on protesters in Baghdad.

Around 450 protesters gathered in El Cajon, home to tens of thousands of Iraqi immigrants and refugees. The local protesters stand in solidarity with demonstrators in Iraq and decried the violent crackdowns on protesters in Iraq that have injured between 600 and 1,200 people, killing 20 to 30 or more.

Abdelahad shows us graphic pictures on her phone: people carrying dead bodies, a child with a gunshot wound, and protesters weeping over a dead one-year-old girl. As of Thursday, Al-Jazeera put the death toll at 20, the Associated Press 33, CNN 22, Fox 31 and Reuters 27.