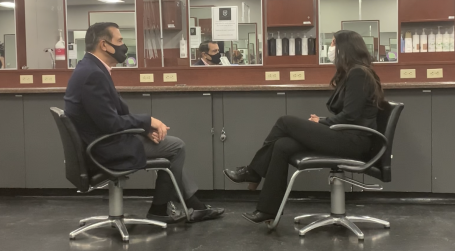 California's State Board of Cosmetology halted licensing exams in March 2020 due to the pandemic. According to Issa and the staff at Bellus, the State Board of Cosmetology is operating at half-capacity due to COVID-19 closures and furloughs, causing some students who graduated during the pandemic to be delayed up to a year in taking their state board exams – a delay that is preventing students from obtaining jobs.  That’s created a backlog of 7,000 graduates waiting for exams now being offered at half-capacity at a limited number of locations.

Issa has sent a letter to Governor Gavin Newsom calling on the state to come up with a solution to “offer a final licensing exam,” such as waiving requirements for part of the exam to be in-person, or allowing graduates to work under supervision in licensed spas, salons, or barber shops. “Now that the students have fulfilled their obligations, it is time for the State of California to do the same,” Issa’s letter states.

“Showing what is going on and where the state is letting people down hopefully will incentivize the bureaucrats to do their job and do it more quickly,” Congressman Issa told ECM.

Staff at Bellus Academy say there are jobs in the market right now with the reopening of hair salons, nail salons, and spas, but newcomers in the industry can’t apply because of their certification delay.

"The industry is open but students still can’t work despite the fact that “we’re kind of one of the industries who invented sanitation,” said Tiffany Wharton, lead cosmetology educator.

“Our career services department is really feeling the impact of that because there are salons and spas open and hiring,” said Erin Vargas, Chief Operating Officer for Bellus Academy.

Wharton also knows salons that are hiring and is frustrated that students can’t apply due to the delay in licensing exams.

Vargas says she is most concerned for the students to be able to pursue their careers in the field and start working.

“I was incredibly concerned. We have over 400 graduates at this point that cannot get their licenses and it’s impacting them economically,” said Vargas, who has a background in higher education.

This is the first time in her career in academia that Vargas has seen a situation like this.

The tuition at Bellus Academy can be upwards of $20,000 for the full cosmetology program. This makes it important for students to receive the reward for that investment and also have the means to repay possible student loans and keep up on expenses.

Latera Olasewere, the Academy Director of Bellus has been with the academy over 11 years and started as the Lead Educator before stepping into her current roll.

Olasewere recalls her own time taking the state boards.

“I got licensed back in 2003, and the process for me was a tad bit different than they do now, I actually had to go to L.A. and I had to do all of my procedures on a live model,” Olaswere reminisced.

Even prior to the COVID-19 pandemic, the state board changed that process to performing state board practical tests on mannequins.

“I don’t see what the hold-up is especially state board now, even before the pandemic, it was a lot more safe [than previously]; it’s not one-on-one contact whatsoever,” said Director Olasewere. 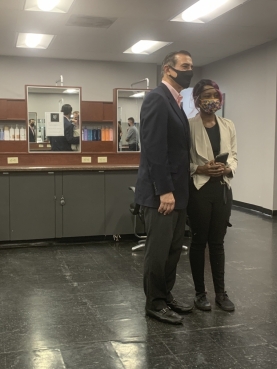 This is leaving many students confused as to why they cannot safely perform their state board exams since the safe and contactless procedure was already in place.

In addition to the students’ delay in taking the state board exams, Bellus has had to move their classes to online and hybrid in the interest of state mandates and public health, and continue to be mostly out-of-the-classroom, despite the reopening of beauty salons and barbers.

“It’s definitely made teaching more of a challenge and we’ve kind of managed through that,” said Wharton.

Lizel Scott, the lead esthetics educator, said the staff at Bellus has been trying to “make sure we keep the students’ spirits up and then helping them feel like they’re going to be prepared the whole tine because there is that wait before they can even take their state board exam.”

Despite the delay in state boards and limited class sizes,  Lizel and Wharton haven’t noticed a drop in enrollment or interest in the programs offered at Bellus.

“This isn’t just a job; it’s a career and something that somebody is passionate about,” said Wharton.

“If anything, maybe not having the normal employment has given them that boost to say ‘let me go sign up for school’,” Wharton added.

Congressman Issa hopes to see the State of California implement a program that allows graduated cosmetology students to begin working in an apprentice-type program under the direction of someone who is licensed until students can complete their exam appointments.

“I feel like I’ll have to relearn everything all over again,” said Jessica Yerkey, a former student of the ethetician “Medi-Lux” program at Bellus Academy and a survivor of the Route 91 terrorist attack.

Yerkey was a caregiver for her disabled brother before he passed away and decided on a career change into the cosmetology field after feeling like her life needed to take a different direction.

Yerkey graduated six months ago but also notes that the test has already changed since she graduated.

This situation is unique to California and other states that have taken more extreme shutdown measures to protect public health amid the COVID-19 pandemic.

“If you were in Arizona and you graduated, you would be working now,” Congressman Issa told students.

“We have another campus in Manhattan, Kansas, and they are fully open and they are receiving licenses,” said COO Vargas.

Issa said he knew Governor Newsom when he was a Lieutenant Governor and that Newsom always supported vocational programs and trade schools. Issa is hopeful that Newsom’s background and historic support of trade programs will allow him to make the necessary changes to allow students to start working.

“Their capacity was based on the historic amount. When you don’t test for over a year, you’ve got a backlog of about 7,000,” said Issa.

Issa’s proposal suggests that if the state cannot get the wheels of bureaucracy to turn quickly enough for licensing tests, he hopes that the governor will allow students to work temporarily under the supervision of another licensed person in their field of cosmetology.

“The students I met with today said they are ready to get to work,” Issa said in a statement issued after his visit to the Bellus Academy.  Noting that other states have developed solutions and successful models that can be replicated, Issa concludes that “7,000 students await an answer and the ability to earn the living they have trained for.”

issa is a faker and needs to resign and be put in jail.