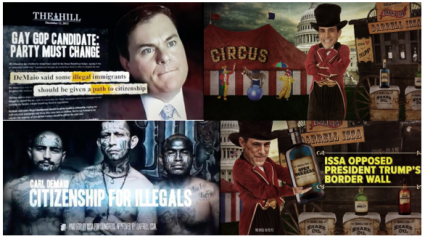 Former Rep. Issa’s new commercial features old newspaper headlines that describe DeMaio as “gay.”  The video also slams and distorts DeMaio’s immigration stance, showing photos of hardcore MS-13 gang members and suggesting DeMaio would support amnesty for such individuals. DeMaio has stated that he supports a path for well-educated immigrants who came to the U.S. as children.

DeMaio meanwhile has released a video on YouTube of his own portraying Issa as a “snake oil salesman.” DeMaio’s campaign ad accuses Issa of betraying President Trump by claiming support for a border wall while voting against it. He also slams DeMaio for supporting an investigation of the President, but fails to mention Issa sought to investigate President Barack Obama.

Ammar Campa-Najjar, the Democratic party’s endorsed candidate in the race, posted this message on Twitter.  “Congressman Issa, we’ve both faced discrimination/threats for being Arab Americans. This is unbecoming and a sign of desperation. Let’s leave this kinds of bigoted political ads where they belong, in the past with Duncan Hunter. Hate has no place in the #50’s future.”

Issa stands by his campaign ad slamming DeMaio, noting that it shows “real headlines talking about his real failures.” The headlines first appeared in the Hill and the Los Angeles Blade newspapers.

Political analyst Kurt Bardello, a former Issa spokesman who has since become a GOP critic, told the San Diego Union-Tribune, “One candidate is doubling down on Trump’s racist border policies that have resulted in the deaths of innocent children, while the other is trying to weaponize a candidate’s sexuality. It’s a race to the bottom.”

The seat is open, since former Rep. Hunter resigned earlier this month after pleading guilty to conspiracy to spend his campaign donations on personal use.

Republican voters seeking alternative GOP candidates have two other Republicans on the ballot in the 50th district to choose from:  former State Senator Brian Jones and retired Navy Seal Nate Wilkins. There are also several independent candidates, a Peace and Freedom Party candidate, and a second lesser-known Democrat, Marisa Calderon, in the race.

For information on all 10 candidates in the 50th Congressional district, see https://ballotpedia.org/California%27s_50th_Congressional_District_election,_2020.