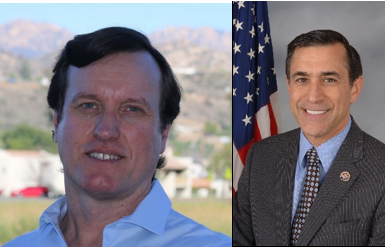 Update June 8, 2022 - The Secretary of State's office has posted preliminary results  for the 48th Congressional including both San Diego and Riverside counties. With provisional and some mail-in ballots remaining to be tallied, Rep. Issa has 59.3%, Houlahan, with 29%, will advance to the November runoff.  Rascon has 10% and Lucinda KWH Jahn has 1.6%.

June 7, 2022 (San Diego’s East County) – Stephen Houlahan, a nurse with a masters in business administration and former Santee Councilman, is heading for a runoff election against Congressman Darrell Issa in November.

Early election night returns in the 48th Congressional District encompassing most of San Diego’s East County show that in a field of four candidates, the incumbent Republican Congressman Issa has 56.91%, while Houlahan, the party-endorsed Democrat, has 32.88% in San Diego County, though the district also includes a small portion of Riverside County that does not yet have results posted online.

Houlahan has been critical of Issa for voting against COVID relief funds for businesses yet accepting six-figures in relief funding for his own business.

Issa signed a brief urging the Supreme Court to overturn Roe vs. Wade. Houlahan has criticized Issa for supporting a ban on abortions without exceptions even to save the life of a mother or for rape victims at a time when a leaked draft opinion indicates the high court is poised to issue a ruling allowing states to ban all abortions.

Issa has said his top priorities are safety of communities, economic opportunities for working people, border security, and protecting freedoms. He  has slammed the Biden administration over inflation and the economy,

Houlahan cites his MBA as qualification to address economic issues and says he wants to help small businesses. Houlahan also wants to expand Medicare to allow access at age 55, instead of 65, to help seniors reduce healthcare premium costs.

yes anyone but the tRumper criminal issa!!!!!