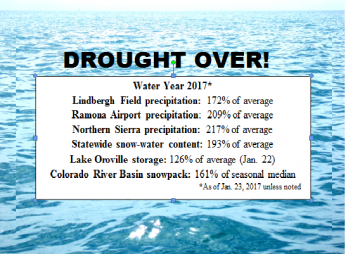 Jan. 26, 2017 (San Diego) — Today the County Water Authority board declared an end to the drought in San Diego County.  The Water Authority will ask Governor Jerry Brown to rescind drought emergency regulations for areas of California no longer in drought conditions.

The Water Authority’s supply forecast has continued to significantly improve with recent wet winter conditions, including a series of record-setting storms across California in January that benefited both statewide and local conditions. As of Jan. 23, San Diego’s official rainfall measurement station at Lindbergh Field had recorded 172 percent of average rainfall since the start of the water year on Oct. 1.

More importantly, the water content of snow in the Sierra Nevada, a prime water source for much of the state, was 193 percent of average as of Jan. 23. Meanwhile, snowpack levels were at 161 percent of average in the upper basin of the Colorado River.

“My first board meeting and we declared the drought over!” exclaimed Kathleen Coates-Hedberg, who voted for the resolution along with fellow Helix Water District board member Joel Scalzitti, both new CWA representatives. “One of the main things about this resolution was sending a message to the Governor,” Hedberg told ECM. “We want to let them know that it’s apparent with the water, rain and snow up in the north and all the infrastructure we’ve put in San Diego Coounty we’re not in a drought emergency.”

Helix Water District’s Board will discuss changes in drought stastus at next Wednesday’s board meeting, February 1st. Currently Helix is still at level 1 drought, which is voluntary conservation, but may declare that over.  However  sine permanent conservation measures under the Governor’s orders are expected to stay, such as not washing down driveways, irrigating before 10 am and after 10 pm., repairing leaks, hand watering with a shut-off nozzle and more. Find details at ww.HWD.com under Helix drought response levels.

“Telling the public to continue extraordinary, emergency conservation measures when the drought emergency no longer exists undermines the credibility of state and local water agencies and erodes the effectiveness of communications during actual water supply emergencies,” said Mark Muir, chair of the Water Authority’s Board. “The state should focus its 2017 efforts on communities that actually need help meeting water quality standards and water demands. We will continue to promote water-use efficiency in the San Diego County no matter the weather.”

“We have had throughout this past drought – and continue to have – all the water necessary to meet the needs of local businesses and residents because our ratepayers made the significant investments needed to prepare for drought,” Stapleton said. “It is imperative that we in San Diego send a clear message to businesses already here, those considering expanding their operations here, and those considering moving here: the San Diego region is open for business. We have the water supply necessary to grow your business, to fuel our $222 billion regional economy and to support a high quality of life for our residents.”

Neither the Water Authority nor the vast majority of urban water suppliers statewide are experiencing supply shortages due to drought. The San Diego region has invested approximately $3.5 billion over the past three decades to increase regional water supply reliability, including seawater desalination, additional water storage capacity and upgraded conveyance systems. Local retail water agencies within the region also have made – and are in the process of making – major investments in local drought-resilient supplies such as water recycling, potable reuse, and desalination projects that further increase regional self-reliance.

The San Diego region met its aggregate mandatory savings target after the state imposed emergency regulations in 2015 to achieve the governor’s goal of an overall 25 percent cut in urban water use. In May 2016, the state updated its emergency regulation to a water supply “stress test” methodology that took actual levels of local supply reliability into account. Under that system, the Water Authority and its member agencies demonstrated that the region has sufficient supplies to avoid shortages even if it experiences three more dry years.

“As we look back over the past several years, it’s amazing to see all that we accomplished together,” Muir said. “We beat the state’s conservation targets, stored 100,000 acre-feet of water in San Vicente Reservoir for future dry years, and continued to embed water-use efficiency as a way of life. Together, we exit this drought even stronger than when we entered it, having enhanced the firm foundation of water supply reliability that supports the economy and quality of life we share.”

For decades, the Water Authority and its member agencies have promoted long-term water-use efficiency through education and outreach efforts such as home water-use checkups and rebate programs, and the agency launched its Live WaterSmart campaign in July 2016 to provide the public with resources for living a water-efficient lifestyle no matter the weather. For more information about these resources, go to WaterSmartSD.org.

Just because you had the public money and oligarchy behind you to buy the water does not mean others should not receive their stolen water back. Send it back to the Salton Sea. Where is the promised mitigation that was part of the deal?