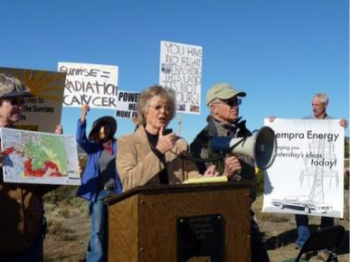 Photo: Supervisor Dianne Jacob, speaking against Powerlink at a 2010 rally

Update:  SDG&E, the Alpine Union High School District, and the Alpine Community Planning Group have responded to community concerns.  The County Board of Education has measured levels at the Alpine Elementary School and found them within EPA recommended levels. SDG&E has offered to meet with any concerned residents or business owners and take measurements. We have also provided additional a broader range of studies on possible health issue.  See our new article here with the latest details: http://www.eastcountymagazine.org/alpine-powerlink-concerns-spark-responses

“While I’m not aware of federal or state standards for EMF, the levels being recorded are way beyond what some experts consider safe,” Jacob wrote. “The risk to public health is my utmost concern. Some studies show that increased EMF levels can cause significant health risks, such as leukemia in children. Alpine Elementary School, the Alpine Community Center and the future Alpine library sit along Alpine Boulevard.  In strongly urge you to investigate and review the matter so the public is aware of any potential health risks.”

Jacob told ECM, “Reports of high electric magnetic field levels along Sunrise Powerlink are troubling. If these reports are valid, the community has every right to have the matter investigated. State regulators never should have allowed this project to be built, but now that it’s operating, they need to take a hard look at any potential health hazards. I have conveyed community concerns about EMF levels in Alpine to the state Public Utilities Commission and sent a letter today to the state asking for an immediate investigation of the matter.”

Jacob said her office has received numerous letters, e-mails and calls from concerned citizens and parents regarding a spike in EMFs in Alpine significantly higher than levels before the high voltage line was installed underground.

ECM has also been contacted by many concerned Alpine residents.  We have reached out to SDG&E for a response, and thus far have not heard from the company.

Angie Brookshire, Director of the Alpine Community Network, an online community forum, sent an e-mail to ECM stating she found the information on high EMF levels “incredibly disturbing..."  Brookshire, who opposed the Powerlink, asked permission to reprint our story (which we granrted), noting that the community of Alpine overwhelmingly opposed Sunrise Powerlink. She hopes to see it “ripped out of our street” adding, “What is going to happen when our children in Alpine start getting leukemia? “

She also worries about property values—and whether Alpine could become the next Flint, Michigan.  “Are we going to become like the town in Michigan where they are all being poisoned by the water and no one will want to live here and our property values will go down and we will become a ghost town?” she asks.

A pregnant resident stopped by our office to voice concern over the health of her unborn baby, stating that she lives very close to where the highest levels were measured.

The mother of a second pregnant Alpine resident advised that her daughter is considering moving out of her home to a location a mile away from the Powerlink.

Ashley Morton told ECM she is “seriously concerned for my family’s health, especially since our neighbor was Kylie Rowand who passed away from the pediatric cancer, Neuroblastoma. This issue needs media recognition and I have contacted Senator Joel Anderson, Dianne Jacob and Assemblyman Brian Jones to this issue.” Thus far, only Jacob has responded.

Anderson, who is running against Jacob for Supervisor, was asked by some concerned constituents to oppose Powerlink but did not do so. He took large campaign contributions from Sempra/SDG&E–so large that he paid a hefty fine in 2009 for taking donations from the utility in excess of the maximum amounts allowed under campaign finance law in California. (Correction: An earlier version of this story stated Anderson supported the Powerlink, but his office has clarified that he did not. Multiple sources indicate he took no position.)

“Parents are beginning to pull their children out of Alpine Elementary,” Lou Russo wrote in a letter sent to media and Supervisor Jacob.  He added that a school board member’s wife has indicated plans to take her own child out of the school due to the EMF concerns. Russo voiced concerns over ties by the Alpine Community Planning Group chairman and another member to the Back Country Land Trust, since it has taken grant monies and land from SDG&E, which built and operates the Powerlink.

One voiced skepticism over an Oxford report linking EMFs to health concerns, claiming it has been disproved by other papers. (Many additional research papers support findings of a wide variety of cancerns linked to EMFs, as well as other health conditions such as brain cancer, Lou Gehrig’s disease, and neuro-degenerative diseases.)

Louise Warren wrote, “I treated cancer patients for 30 years and from a clinical perspective the link to leukemia is real. The studies that say otherwise are usually paid for by the corporate interests of the energy companies. I would RUN out of Alpine with your children before the inevitable clusters of leukemia comes and before the value of your homes decreases.” Noting that some studies have shown problems with livestock exposed to EMFs, she added, “Too bad…I was considering moving to Alpine but now won’t even consider it.  Don’t listen to their lies.”

Amanda Perkins asked, “What about the Heights Charter School and the daycare, both on Alpine Blvd.?”

“Looks like Erin Brockovich has a page to report local issues,” Candice Ray posted. “It is my understanding that she is already involved in some pacacity with this issue, but thought some people may want to create a posts to show her that our community cares:. “ (Brokovich page: http://www.communityhealthbook.com/map.)

Some wanted more information.   Brian Lane suggested measurements of levels at places not on the street should be taken. “Our community members don’t play in the street, so maybe measurements should be taken where people actually are for length periods of time. On school grounds, in the library, in their preschool.”

That’s a valid point, since underground powerlines have higher EMF spikes directly over the buried lines than are typically measured beneath above-ground lines, however the levels taper off more quickly as one moves away from an underground line than an above-ground line typically, according to http://www.emfs.info/sources/underground/. (Update: Alpine Sun's editor has indicated EMF levels inside her office on Alpine Boulevard are low, so high readings in the street do not necessarily mean high levels inside nearby buildings.)

A poster listed only as “Jim” voiced anger at learning of exposure in his neighborhood. He asked for a map of areas affected, adding, “ Or is anyone living along Alpine Blvd. just bathing in a pool of higher level EMF?”

Another poster who said he visits the backcountry on occasion wrote that he has a pacemaker and “magnetic fields are now an issue for me.” He wanted to know if  the EMFs in Alpine are high enough to cause problems with the pacemaker he relies on to control his heart rhythm.

Natalie Dubya voiced anger at some Alpine community leaders who took money from SDG&E, as well as at the U.S. Forest Service that allowed Powerlink through the Cleveland National Forest.  “So many people opposed it, but rather than fight it like other communities, took their blood money. And there was that little girl who died of a rare form of cancer last year…makes me incredibly disappointed in my childhood neighbors, my representatives and my community…you traded money for your children’s and grandchildren’s health. Now that I no longer live there, I would not consider moving back.”

Jessica Falk Michelli voiced outrage at the suggestion by an engineer who did the EMF study that Alpine children should be tested regularly for leukemia. “So the solution is to wait around and test the kids each year to see how many get cancer? Really?!?!? Let’s just sit and wait for our CHILDREN to receive a possible death sentence?! Unacceptable,” she wrote.

Michelle MyBell urged the community to organize a “petition or protest” to get the problem fixed. “I think the more heat we put on the officials the more likely we are to get some results,” she wrote, also suggesting that the Environmental Protection Agency (EPA) be contacted.  She concluded, “I am ready and rarin’ to raise some HELL for our community.”