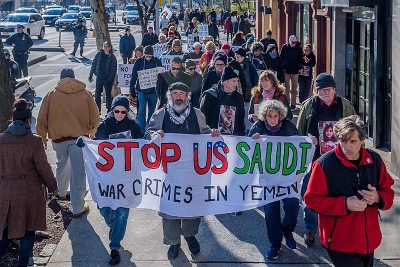 CC photo by Felton Davis:  New York protest in 2017 over U.S. arms sales to Saudi Arabia, which has been accused of war crimes in Yemen

The Values in Arms Export Act restores Congressional authority over arms sales and would substantially improve U.S. monitoring of how arms are used.  It would also help prevent exported weapons from being used to violate human rights, and attack civilians, humanitarian workers, and medical facilities.

The Values in Arms Export Act updates the Arms Export Control Act to specify the principles of reasonable behavior and compliance with human rights and laws of war that the U.S. demands from states purchasing U.S. weapons.

Under the legislation, Congress, the Executive Branch, or a newly-created Human Rights and Law of War Oversight Board can designate a nation as a “country of concern” if it violates these principles. If a country commits further violations during a three-year period after designation, is designated a second time within ten years, or fails to make sufficient progress in reforms, the country would be banned from arms sales for ten years.

The Human Rights and Law of War Oversight Board would make designations, conduct its own oversight work, monitor compliance, and evaluate new policies to ensure respect for human rights and law of armed conflict considerations in the future.

“The United States should be strengthening human rights abroad - not weakening them. Exporting arms to countries that use American-made weapons to violate human rights and kill civilians undermines our moral authority and diplomatic legitimacy, perpetuates cycles of conflict, and boosts recruitment for terrorist organizations. I am proud to introduce the Values in Arms Export Act and look forward to working with Senator Murray to strengthen our commitment to human rights and restore congressional oversight over our arms sales,” said Congresswoman Jacobs.

“Simply put, U.S. weapons should not be being used to commit war crimes, and it’s time Congress re-asserted its authority over international arms sales to prevent that,” said Senator Murray. “But far too often—especially under the previous administration—Congressional authority, and our moral responsibility to uphold human rights around the world, has been ignored. The American people don’t want to see U.S. weapons used to commit war crimes against kids or innocent civilians. It’s time we strengthen the role of Congress in future arms deals and keep our weapons out of the wrong hands. I’m glad Representative Jacobs is helping lead this legislation in the House.”