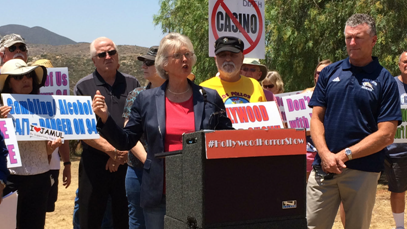 Updated with corrections based on CHP data just received:  accidents spiked in 2015, before the casino opened. But DUI-related crashes are up.

By Miriam Raftery; Jonathan Goetz also contributed to this report

July 2, 2017 (Jamul) – Supervisor Dianne Jacob joined Jamul residents Friday in a press conference to share concerns over accidents along an 11-mile stretch of State Route 94.  The group also called for completion of promised roadway improvements that have not yet begun.

The Jamul Indian Village has issued a response contending that the casino is being unfairly blamed for an uptick in accidents that may be related to other factors, and points a finger at CalTrans and Supervisor Jacob for delays in roadway improvements that the tribe says is due to Caltrans lacking land use authority.