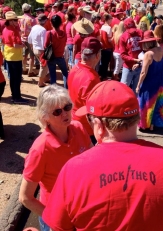 March 11, 2015 (Jamul)--Approximately 200 protesters held a “flash mob” demonstration in Jamul Saturday, wearing red as they voiced their continuing opposition to a casino under construction at the Jamul Indian Village.

Excavation is completed at the project, site of a planned Hollywood-themed casino in conjunction with Penn National Gaming.

Projected to open in mid-2016, the casino is expected to include a three-story gaming and entertainment facility of approximately 200,000 square feet with gaming, restaurants, bars, and parking.  The tribe estimates the project will create an estimated 2,500 construction and permanent jobs in the area.