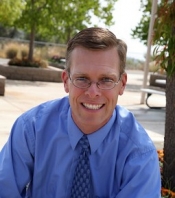 “If I’m on the board, I will have an open door policy and be able to work with all groups.”- Jay Steiger

Steiger wants to help “develop educational opportunities for our children and be a public voice for educating the community.” He started getting involved when his son was in kindergarten as a classroom volunteer. In 2007-2008, he became a part of the Budget Study Committee and has been more involved in the PTA.

He is a native San Diegan with two kids in the La Mesa-Spring Valley District; one son goes to Parkway Middle and another goes to Murdock Elementary. A local resident for 38 years, Steiger has been very involved in the district as a PTA member, classroom volunteer, youth soccer coach, Little League scorekeeper and announcer.

“I learned how schools are funded and what the district does with the money. You can have passion, but you do have to understand how things are done so you can make well-rounded decisions,” he says.  People started approaching him to run for the board for the first time in 2010, and he got fourth place. But he was “very heartened when parents told me they still support me.”

He has had both disagreements and agreements with the board over four and a half years, as a member of the LMSV budget study committee, an advisory board. All on the board, including him, are frustrated with the way the state distributes money to our schools, he observes. There have been deferrals, cutting the budget but not paying on time. He sympathizes with teachers, saying “that’s very hard for schools because they have a certain payroll they need to met.”

He views the biggest challenges in the district as two-fold.  “The budget is obviously the biggest one--from a local standpoint, $17 million in reduction in about four years,” he notes. “It’s caused class sizes to increase and we’ve lost a lot of our staff.” He insists that “we have to make sure our kids get an outstanding education.”

Second, Steiger believes, “Our parents are losing confidence in our ability to teach children. We have to become activists. I see a need to get out in the community to highlight things we’re doing right.” He goes on to say that “I’m concerned the board has become complacent. We need to be out there consistently. If I’m on the board, I will have an open door policy and be able to work with all groups. I think parents need to be reassured that their kids are safe and being well-educated, especially [in] middle schools. That way, kids can continue to come to these schools. We need a well-balanced student community.”

Regarding Props 30 and 38, ballot measures to increase education funding, he plans to vote for both of them.

“At the budget workshop put on by the School Innovation and Achievement, Jack O’Connell, former state superintendent of public education and feature speaker on staff, made it clear that the “bottom line is one of these has to pass for these schools,” he says. “PTA is a big voice for Prop 38. Something has got to pass to bring new money for these schools. I’m a big believer in strong oversight. These social services have also gotten huge budget cuts. But they benefit our children (food, Medicare etc). I would rather we as people collectively decide we could sacrifice for our kids. If we get new money from one of these props, we have to be careful how we use it. We need to be respectful of restoring these cuts.” 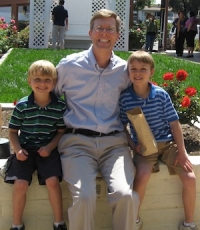 When he promises to “protect and advance the strengths of the district”, he explains that “we have to engage everybody. We have to get out in the community and highlight successes. An example is the principal at Parkway Middle School told how they achieved higher test scores for yearly STAR testing, and she got me enthusiastic about it. So, you can have confidence in these middle schools. We’re advancing our district by coming up with a solid plan to build forward in a meaningful and sustainable way. So, we rehire more teachers. We know we can sustain it.”

To rehire qualified teachers,  he says, “We’re going to figure out strategic plans. It can’t be happened all at once. Instability is dangerous. Teachers have taken sacrifices to protect kids. I can’t thank them enough for it. They’ve had to deal with colleagues being laid off, adjusting to shorter school year, salaries being reduced, and much of support of infrastructure being removed. They’ve handled it in a way that has shielded our kids at the highest degree possible.”

To advocate at the state level for reform of funding formulas and unfunded mandates, there have been “cut deferrals over and over again. It needs to change. The state of California owes $10 million in deferrals. It needs to be reformed. Mandates are starting to change. The state said you must do this, but no money, like with PE, arts, and nutrition. How can kids participate in PE if you don’t have the money to get the resources? Let’s be smarter about expectations. Let’s be sure the money is there to support it.”

As Vice President for the Mount Helix Council of PTAs, he came up with a resolution that was successfully passed calling for state testing to be done every other grade, starting at third grade. He will continue to support this because “you can achieve the same results as long as the district has viable alternative measures and assessment. No Child Left Behind now ESEA [Elementary and Secondary Education Act] is up for re-authorization. It has been stuck in Washington though. I’d like us to re-open testing to kids, and I think we can change it in meaningful ways to make sure our educational needs are being met, which is that we’re making progress in academic areas. It’ll save money too. If testing is done at third/fifth/seventh grade, the other grades could be assessed at an alternative measure, something that’s more classroom and grade level based rather than a standardized test.”

Steiger is endorsed by the La Mesa-Spring Valley Teachers Association. His endorsements include people from different backgrounds who have supported him in 2010 and now in 2012.  “That touches me most deeply. They have told me `What I care about is that you are open to hearing our concerns and seeing you in the community.’” He says, citing Santee school board candidate and fellow PTA advocate Elana Levens-Craig as an example.

As a side note, he has mentioned that there has been talk about growing California’s economy and jobs. Right now,  our state is the ninth largest economy  in the world and the largest state economy ever in the U.S.

“To sustain our economy, we have to educate our children now and support our schools from pre-k to university, which will invest in our economy in the future,” Steiger concludes. “But we also need to change the fact that CA is 47th in per-pupil spending.”