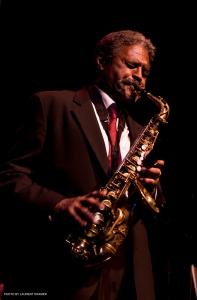 “Conversations with a Legend: Charles McPherson,” organized by communication instructor Lindy Brazil as part of her class, “Arts and Culture in San Diego,” is set for 11:30 a.m.- 12:50 p.m. Thursday, April 5 in Cuyamaca College’s Digital Theater, Room B-101. The event is open to the public.

“This is a wonderful opportunity to hear this international recognized jazz musician talk about his life as a musician and to listen to him play,” Brazil said, explaining that in an effort to expose students to the arts, she arranges for artists and musicians to visit Cuyamaca College to share their life experiences. “Charles is a delightful story-teller and masterful musician.”

McPherson, who lives in San Diego with his wife, Lynn, has influenced and inspired generations of musicians and listeners for more than a half-century, and remains a musical tour de force.  Most famous for his work from 1960 to 1972 with virtuoso bassist and composer Charles Mingus, McPherson’s rich style, rooted in the blues and bebop, and his jazz-improvising skills are still very much a part of the jazz music scene. He has recorded with the likes of Barry Harris, Art Farmer, Kenny Drew, Toshiko Akiyoshi, and the Lincoln Center Jazz Orchestra with Wynton Marsalis.

He continues to tour worldwide and give clinics, including the summer jazz programs at Stanford University and UC San Diego. His renditions of pieces from Charlie Parker on the 1988 soundtrack for the Clint Eastwood film, “Bird,” put his touring schedule into overdrive with younger jazz aficionados being introduced to his gift of improvisation.

Just back from playing at the Jazzhus Montmartre in Copenhagen, one of Europe’s leading jazz clubs, the Joplin, Missouri-born  alto saxophonist is preparing for his next gig, “A Night of Jazz and Dance,” May 18 and 20 with the San Diego Ballet, where he is the resident composer and his daughter, Camille, is a principal dancer. Two pieces he composed for the company are going to be performed at Lincoln Center by Marsalis’ band in honor of McPherson’s 80th birthday in April.

At Cuyamaca College, one of some 40 campuses he estimates he’s visited in his long career, McPherson said he will join Brazil in talking about jazz history and the current state of the genre, as well as race and culture as it pertains to music. “We will also talk about how jazz has influenced pop music, so I may play a tune students know, and add aspects of jazz,” he said.

Since moving to San Diego in the late ‘70s, McPherson has dedicated his time to both performing and music education. He holds an honorary doctorate from California State University, San Marcos for mentoring future generations of musical artists, and in 2016, he received the Don Redman Jazz Heritage Award for his contributions to jazz education and music.

Cuyamaca College is at 900 Rancho San Diego Parkway in El Cajon. For more information about the college, go to www.cuyamaca.edu.