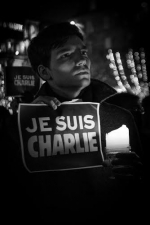 Editorial originally published in Le Monde January 8, 2015 and on the U.S. Embassy website in Paris

January 9, 2015 (Paris)--Wednesday’s barbaric attack on the journalists and staff of Charlie Hebdo, as well as on policemen guarding them, shocked and saddened the entire world.  As we pause to mourn the loss of life, I am reminded of how the people of France showed their support to us in the aftermath of 9/11.  On September 11, Americans were in a state of shock as we tried to come to grips with that terrible loss and our own grief and a growing sense that our world would be different from that moment on.  I remember seeing Le Monde’s headline that day: “We are all Americans”, and how much those words meant to me that day as an American, a New Yorker and a friend of France.