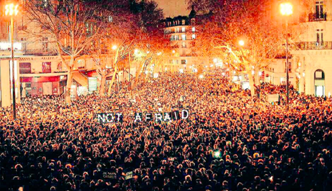 January 7, 2015 (Paris)--Crowds around the world are standing up and journalists are speaking out to show solidarity with journalists slain at a French satirical magazine in Paris on Wednesday by  Islamic fundamentalist terrorists. The dead include the publication’s editor, other journalists including  prominent cartoonists, and two police officers.