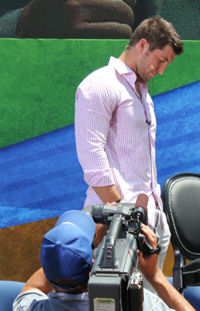 By Rebecca J. Williamson
June 20, 2012 (San Diego) -- East County’s Shadow Mountain Community Church hosted Tim Tebow New York Jet’s backup quarterback, to speak at a Fathers’ Day service held last weekend at Qualcomm Stadium.
ESPN, NFL TV and other media were in attendance. So were fans Jose Luis Duenas and his wife, Carmalina, who came to see Tebow because “he is a good example for boys.”
Alex Hotye of El Cajon, observed that of course, curious “sports fans” would come, but also church members. Tebow may have cleared out attendance in other local pews on this Sunday morning. Other churches may have been better served doing a quick prayer service on Tebow’d knee and releasing their congregation to attend.
Tebow’s message urged attendees to “finish strong” and as the mini-mob around him following the service attested to – he did as well.