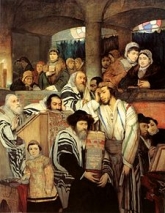 The day begins with a family dinner that includes things like apples and honey, symbolizing the fruit of the Earth and a sweet year. It also includes a round Hallah bread, symbolizing how the year has no start and no ending. It ends the ten days of awe that start with the New Year, Roshashana, meaning literally the head of the year.

It involves a fast, no water and no food until the next day at sundown. Since this year the service will include the Sabbath Service as well, it will be longer since it will include the regular liturgy. It ends with a break the fast meal at home, and many Jews carry honey cake to Temple to break the fast after the last service of the day.

The service is meant to ask for forgiveness for sins against God and sins committed against other humans. That mean an apology to the aggrieved individual, and not sins against God.  In case the aggrieved person refuses to forgive the person asking for that forgiveness three times, it is assumed that the person not forgiving is the sinner and this is an offense to God. This goes back to the Middle Ages, and it is a way to keep peace in the community.

According to Jewish faith, it is also the day the book of life is sealed at sundown after the fast, and God decides who will live and who will die that year. The proper greeting that day is Hatima Tovah, may you have a good signature in the book of life.

One question many people ask is why the dates of Jewish holidays change every year? That is because the Jewish Calendar, one of the oldest, is a lunar calendar. Every four years it adds a month to adjust for the shift in days. The year just starting is  the year 5774 since creation Who exactly started the count has been lost in the mist of history. But what we know is that the modern calendar goes to the Fourth Century when Hillel II did establish the modern count using extremely complex mathematical calculations.