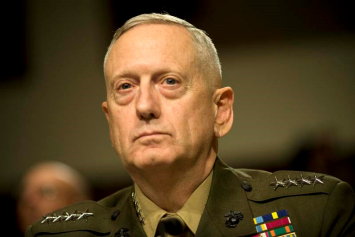 Photo: Defense Secretary Jim Mattis warned in his resignation letter of Russian efforts to "shape a world consistent with their authoritarian model...to promote their own interets at the epxens of their neighbors, America and our allies."

December 21, 2018 (Washington D.C.) – Prominent Congressional leaders in both parties have voiced alarm over President Donald Trump’s announcement yesterday that he plans to immediately withdraw U.S. troops from Syria. He also ordered the Pentagon to withdraw half of America’s forces from Afghanistan starting in January.

While that may come as welcome news to families of long-deployed military members, the decision was made without consulting Congress, military leaders or key cabinet officials. Many experts warn that this could plunge the region into chaos, allow ISIS terrorists to regain power, also benefitting Russian president Vladimir Putin, who has backed Syrian strongman Bashar Assad, as well as Russia’s ally, Iran.

It has also resulted in resignation of Defense Secretary and retired General Jim Mattis, known as the "warrior monk" for his deliberative approach to fully studying military matters before making key decisions.